Did You Know Angela Bassett Was In Green Lantern? 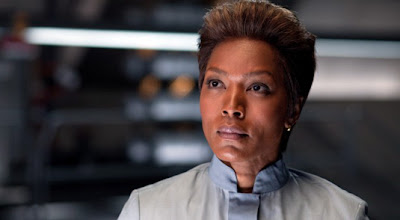 Angela Bassett has the Brain Power in ‘Green Lantern’
Also: Ryan Reynolds faces his fears and Blake Lively steps up to the plate
Another encouraging week at the box office for blacks. No drug dealers, drug addicts, gangsters, killers, pimps, hustlers, hookers or crooked cops in another major blockbuster film opening at the box office this week. In “Green Lantern,” Angela Bassett portrays the brilliant scientist Dr. Amanda Waller. The film also employs the voice of Michael Clarke Duncan as Kilowog, who is a “gifted genetic scientist” and Nick Jones, last seen in “Battle: Los Angeles.”

Bassett may not possess any super powers, but she beams when she acknowledges that she has “brain power.” It’s not surprising seeing Bassett in this type of role because she has always taken pride in her profession. She has always relied on her talent and not nudity, hype or offensive roles that might hint of an Oscar. Also, this is not the first fantasy film she has appeared in. She played Dr. Kaela Evers in the scif-fi film “Supernova” and starred in the alternate reality movie “Strange Days.” Nonetheless, she relishes her role in “Green Lantern.” “I feel honored to have been chosen to play Dr. Waller,” she admits. “There’s the human element and then there’s the totally green screen you’re dealing with. There is just so much going on…It’s amazing how Martin Campbell (director) brings it all together.”

“Green Lantern” was not Bassett’s comics of choice when she was growing up. “I moved towards ‘Archie,’ ‘Little Richie Rich’ and ‘Veronica.’” Needless to say, she did her homework when offered the part of Waller. She ceases to be amazed at the current fascination with the comics in cinema. “The level at which comics are brought to the screen gets better and better and it’s exciting to just be a part of that,” she says.

Whether comics, comedy or drama, the stakes are the same when Bassett considers a role. “Once I get past the title page, the hope is that something will grab my attention, grab my interest and my imagination and I can see myself in that world; hear those thoughts and those ideas.” With such an impressive track record, she was still able to pick a favorite project. “It has to be ‘What’s Love Got to do With It.’ It made an impression on people, a [form] of indoctrination and consciousness so that not a week goes by without someone mentioning that.” Bassett intimated that a “Waiting to Exhale” sequel might come to fruition.

It has been interesting to watch Ryan Reynolds rise. Like Bassett, I have been interviewing him since 1995, which was for “Blade: Trinity,” with Wesley Snipes. When The Film Strip talked to him last year for “Buried,” it was surprising that he was not nominated for his solo performance in a box throughout the whole film. In “Green Lantern,” Ryan says it clearly mirrors his life. “The film parallels my career in a certain way. Hal Jordan is not fearless. It’s his humanity, his ability to overcome fear that separates him from the other green lanterns and gives him that little extra something, I think. But for me, each time I take a role I’m always nervous about it at the beginning. You’re always afraid that, you know, what if that, what is this. Every time I take a role I’m somewhat terrified at the beginning until I get into it. So a big win for me, really, it is stepping forward in face whatever fears that I’ve created for myself and kind of going forward. Those are always big moments for me, yeah.”

And when you see that fear on screen it’s real. “I didn’t expect to have wirework like that,” Reynolds revealed. “I mean, it defies the laws of physics that a 6’2″ person should be doing that form of gymnastics whatsoever is [incredible]. But they had me doing that before production to get ready-they call it aerial aware-so when you’re flipping and turning and spinning you kind of know where your body is at in relation to the ground. So I wasn’t expecting that. I mean my third day shooting they fired me up in the air a couple of hundred feet, at 60 feet a second and it was just a mind-boggling experience. It was so funny. Thank God my character gets to be terrified when I do it because it was just genuine each time I did it.”

Co-star Blake Lively had just as much fun as the rest of the cast. “I think that Carol is very unique in this genre,” she boasts. “She’s an incredibly powerful woman and she’s also a fighter pilot along with Hal. She runs her father’s aviation company and it’s rare to see such strong women existing as equals amongst men in film, especially in this genre.

I think that women will appreciate that, but I think that anybody who goes to a theater, you want to sit down and be transported to another world for two hours and this movie is appealing to everybody. It’s full of heart. It’s full of humor. It’s full of action, and it’s not just on planet earth, but in the entire alien galaxy. There’s tons of alien species and different planets. I don’t care who you are, but it’s going to the cinema like you were as a child and just having your imagination blown open. Also, Ryan is half naked.”