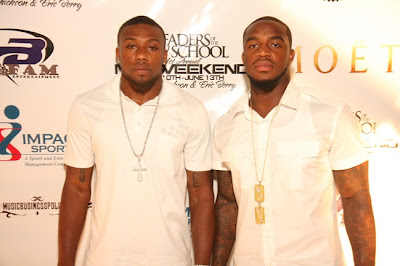 Two of the NFL's hottest rising stars, Kareem Jackson of the Houston Texans and Eric Berry of the Kansas City Chiefs, have teamed up with one of the cities most notable event production teams to launch the first annual NFL "Leaders of The New School" Weekend which took place from June 10th-13th, 2011. The weekend highlighted the NFL's newest generation, most of which were first-round draft picks, and celebrated their successes on and off the playing field. The weekend kicked off with the "All White Affair" sponsored by Moët & Chandon Imperial. This affair took place at Aurum Lounge on Friday June 10 at 10pm.The weekend concluded with the first annual "Leaders of the New School" Youth Football Camp which took place at North Atlanta High School on Saturday June 11 at 9 am, over 100 boys were able to learn how to improve their football skills with drills and were sat down to discuss making the right decisions in life on and off the field. The Kareem and Eric were joined by dozens of their NFL friends, celebrities, and sports world elite at each event.

Leaders of the New School Youth Camp Participants and Coaches