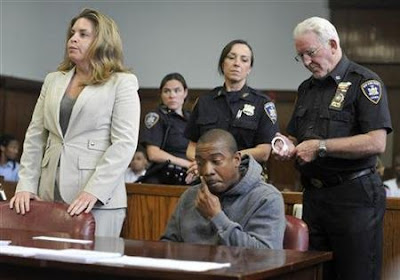 NEW YORK (Reuters) - Jailed rapper Ja Rule was sentenced in federal court in New Jersey on Monday to 28 months in prison for failing to pay more than $1 million in taxes.

The 35 year-old hip-hop singer and actor, whose real name is Jeffrey Atkins, is already serving a two-year jail sentence on a weapons conviction in New York. The two terms will run concurrently, according to the U.S. Attorney's Office in New Jersey.

Ja Rule previously pleaded guilty in March to three counts of failing to file tax returns. According to prosecutors, Atkins did not pay taxes from 2004 to 2008, costing the U.S. government more than $1.1 million.

"Taxpayers do not have the luxury of deciding whether to comply with laws," U.S. Judge Patty Shwartz said on Monday in delivering the sentence.

Ja Rule pleaded guilty to attempted criminal possession of a weapon last year and began his New York prison sentence in June. The charge stemmed from a July 2007 incident, when police pulled over the singer's car after a concert and discovered a semi-automatic handgun hidden away, according to authorities.

Fellow rapper Lil Wayne also was arrested after the same concert at New York's Beacon Theater when police found him smoking marijuana near a tour bus.

Ja Rule received a Grammy nomination in 2002 for the album "Pain is Love." He is expected to release "Pain is Love 2" later this summer.