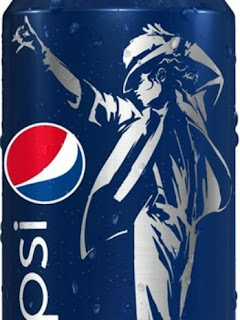 Is this a little late? Pepsi has revived its sponsorship deal with Michael Jackson, partnering with the late singer’s estate to roll out a billion Pepsi cans with a silhouette of Jackson as part of its newly launched “Live For Now” global marketing campaign.

The beverage company and Jackson’s estate declined to disclose the financial terms of the latest deal. Jackson signed onto a Pepsi sponsorship deal in 1984 for a then-record $5 million.

The new campaign is part of PepsiCo’s pledge to ramp up spending on its flagship cola, which has been losing ground behind arch rival Coca-Cola Co.

PepsiCo is boosting its overall marketing budget this year by as much as $600 million, or by about 20 percent, according to The Hollywood Reporter.

Damzel's two cents: I'm not a soda drinker, but I may just get a can for memorabilia. But I do think they could have done this maybe five years ago when it would have made a difference.