Spike Lee Accused of Robbing the Little Guy on Kickstarter.com 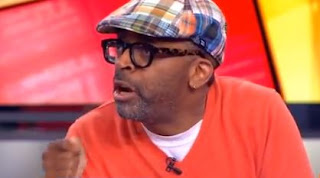 Spike Lee did what many celebrities would LOVE to do, go in on a reporter while live and on air because she was throwing shade on his craft and way of making money for his film! He announced that he was creating a Kickstarter.com campaign to finance his next independent film and she challenged his need for donations.

Kickstarter.com is customarily used by up-and-coming film makers who usually don't have the vast resources for funding. So in a live interview with Trish Reegan of Bloomberg's "Smart Street" they barely waited for the bell to ring before they began sparring words to support their point and if you know anything about Spike Lee, he is no pushover.

This is how it went down.
So, do you think Spike Lee should be using Kickstarter? Do you think he'll make his goal? We'll see.
Bloomberg Damzelindistress film maker Kickstarter.com Melissa Stewart Smart Street Spike Lee Trish Reegan