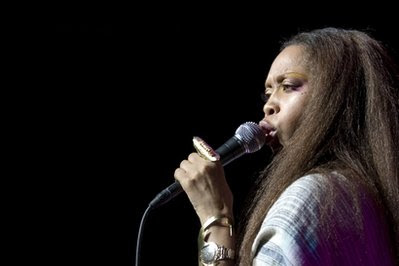 Even though rapper Rick Ross lacked a father figure growing up, he found guidance through many of Tupac Shakur's songs that taught him how to approach life as a young man.

So when Ross was asked to perform at Shakur's 40th birthday concert celebration Thursday night, he didn't hesitate to take the stage to pay homage to the slain rapper he calls his role model.

"Tupac played father for a lot of dudes like me," Ross told a crowd of about 500 at the Atlanta Symphony Hall after he and Meek Mills performed their single "Tupac Back."

Ross along with singer Erykah Badu, jazz musician Roy Ayers, rapper Bun B, and the rap group 8Ball & MJG joined to raise money for the Tupac Amaru Shakur Foundation to help students develop their skill in the creative arts.

Comedian Mike Epps hosted the concert and presented a $10,000 check to Shakur's mother, Afeni Shakur, for the foundation. Attendees stood and applauded Epps for the donation.

"We celebrated his life more so his death," said actress Jasmine Guy, a close friend of the rapper who showed a video to honor his life and highlight his music career. "His voice still resonates. It's amazing. That's why is important that we keep the Shakur foundation going."

Badu took the stage to sing several of her songs including "Bag Lady." The Grammy-winning singer also sang "Soldier," which was dedicated to Afeni Shakur, who sat a few rows away with a smile on her face.

Shakur was one of rap's best-selling artists, becoming an even bigger star after his release from prison in 1995 with his multi-platinum selling album "All Eyez on Me." He was shot to death while riding in a car in Las Vegas a year later.

The birthday celebration occurred while New York City police are still investigating an online posting from a convicted felon who claims to have shot and robbed Shakur in 1994 — two years before the rapper was slain. According to website AllHipHop.com, Dexter Issac says he was paid $2,500 by James Rosemond to shoot and rob the rapper.

Rosemond's lawyer said his client did not orchestrate a plot to ambush Shakur.

"You have a lot of family, friends and fans that still love for Tupac," rapper Warren G said of Issac's confession. "A lot of people aren't going to let something like this go. For a dude who is just now coming out with this, it's bold."