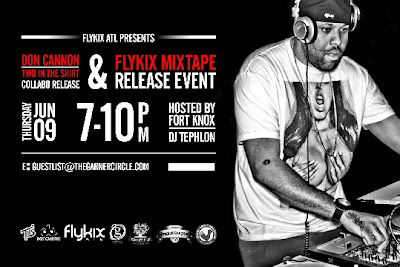 FlyKix, Atlanta's premiere sneaker and clothing boutique nestled in the heart of Atlanta's historic Castleberry District hosted an exclusive debut of the much anticipated Two in the Shirt T-Shirt brand collaboration with celebrity DJ Don Cannon. This event also featured the release of the FlyKix ATL commemorative summer mixtape with the evening's festivities hosted by infamous MC - Fort Knox. The cypher competition had the event's attendees on the edge of their seat and very entertained. This event took place at FlyKix on June 9, 2011 from 7:00pm to 10:00pm.