on August 02, 2011
Exclusive: Chandra Wilson to Direct Another Episode of Grey's Anatomy 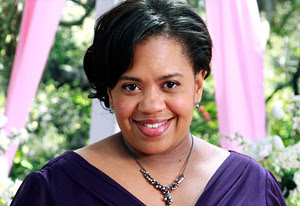 Chandra Wilson is taking another spin in the director's chair, TVGuide.com has learned exclusively. Wilson, who plays Dr. Miranda Bailey on Grey's Anatomy, will direct the third episode of this season, which features several of the fifth-year residents doing their first solo surgeries.

This is the fifth time Wilson has directed. Her co-star Kevin McKidd, who plays hunky trauma surgeon Owen Hunt, is slated to direct his second episode this season. 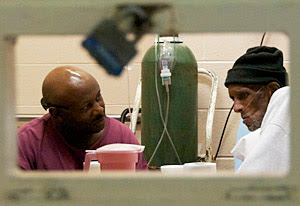 Though not reflected in the ratings, the Documentary Club is one thing the Oprah Winfrey Network is doing right. Serving Life, which premieres Thursday at 9/8c, makes the channel 3-for-3 in its presentation of feature-length cultural studies.

The riveting Serving Life focuses on four new volunteers in the Louisiana State Penitentiary at Angola's hospice program — all long-term inmates themselves. Because the average sentence at the maximum security prison is 93 years, inmates die there, some inevitably from terminal illness. To handle this, warden Burl Cain has instituted a hospice program, reasoning, "It's just immoral not to care about somebody dying and try to have compassion when they're going to wherever they're going."

The irony of killers watching over the dying gives way to a more subtle twist: While death is the reason that so many of them are serving at Angola in the first place, it has become their salvation. As Cain explains, "Hospice is the ultimate test: have you changed or have you not?" Not only do these criminals find use for their time caring for those who often cannot so much as bathe themselves, they're also confronted with the enormity of the crimes they've committed.

Director Lisa R. Cohen dares to explore the emotional lives of prisoners. This is why her work stands out from the wide range of prison programming that populates contemporary airwaves. Her eye is as unflinching as the hospice workers do their jobs, and a disclaimer precedes the film accordingly: "The events that take place in this documentary are factual. This program contains scenes of death and dying. Viewer discretion is advised."

What initially sounds like the most hardcore piece of work that Oprah's ever attached her name to is gentler than that: Yes, you are confronted with shots of deteriorating men who slip away before your eyes, but Serving Life never feels particularly sensationalistic (slow deaths aren't exactly sexy). At one point, one prisoner's death is confirmed with the gentle head shake of one of the men who's looking after him. The subject of dying rarely is handled with such subtlety, regardless of the medium.

Serving Live is necessarily heavy, and Cohen provides a relatable touchstone for viewers in Charles Rogers, one of the featured quartet of volunteers in the program, who's serving 35 years for armed robbery. His struggle with his job is pronounced and utterly human. Could you deal well with other people's bed sores and feces if you were never confronted by such things before? Cohen makes you relate to a supposedly hardened criminal.

Becoming Chaz review: Human after all

That is the movie's beauty: You never forget that these people have committed terrible acts, and yet overwhelming compassion supersedes it. The image of a frail, dying old man eating ice cream is moving, regardless of his murder history.

The assertion by Anthony Middlebrooks Jr., another of the four volunteers, that, "I've heard hospice referred to as a process of helping one die with dignity, but more than that, I feel it's helping one live out life with love," is poetic despite the fact that a robber has said it. Serving Life does not seek to apologize for the heinous pasts of those it profiles. It's too pragmatic for that. Watching people being good to each other in this capacity is moving enough to make one prisoner's clichéd insight at the end of the film ("Giving back, that's what really matters") tolerable, if not essential.