Everybody knows the Grammy-winning multi platinum artist Monica. But if you need a history lesson you can always crawl from under your rock and backtrack to 1995 where it all began with her debut album Ms. Thang. CRUNK Magazine sat down with Monica at the Lincoln Reach Higher Red Carpet Premier event in Atlanta to talk about her new album The Makings of Me and her new life.

As always, Monica is looking as beautiful as ever. Rocking a long blonde ponytail and a sweater and jeans; she’s as approachable as a clerk in the Lenox mall. Monica is no longer the boisterous, outspoken, down-for-whatever teenager that grew up in front of our eyes. Monica is a child star (a term that she doesn’t like to use) done right. Don’t get it twisted, Monica is still very outspoken but in a grown up and mature way. With life lessons under her belt, Monica has learned a lot about herself as a person, relationships, and the business. That being said, she’s patterned her life around the decisions that she’s had to make. She’s a new mother and engaged to be married Monica is a full grown woman and wants everyone to know it. Her new album The Makings of Me is another compilation of chapters in the book called Monica.

Backtracking, Monica Arnold came to be known as Ms. Thang when she was only 13 years of age. Now 26 and a mother, her life has changed in so many ways. The Makings of Me is the vessel through which she chooses to tell us this chapter of her life story. She also shares wisdom for others who may have gone through something similar.

“I want to show people that there is a life outside their circumstances.” 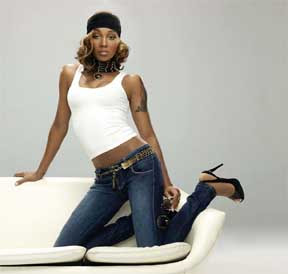 With a reflective look, Monica recalls the tragic suicide of her ex-boyfriend and how she was able to deal. “I started writing poetry after Jarvis’ suicide and we created songs through that. I brought in people like Tank and Sean Garrett that could help me make it work.”

Monica notes that because The Makings of Me is a personal testament of her life, Dozen Roses as her favorite. “…cause it’s about where I’m at now. It talks about being happy and finding love and accepting all the cards that life deals you and keeping it moving.” A Dozen Roses was produced by Missy Elliott and sampled by Smokey Robinson.

“My other favorite is Sideline Ho. That’s self explanatory. It describes how a woman feels to find out that her loved one cheated. This is strictly for the women. Fellas, there’s something else on the album for you, but this aint it.” Monica credits Tank with titling the song after long discussions about women who chase men who are already spoken for. She’s not holding a grudge, “…but she knows who she is.”

Monica first single off the album was Beat Drop, produced by Jermaine Dupri. It was a ‘most requested’ on the radio and on the music video countdowns. Monica says, “At the club, Jermaine would say, every time the beat drop you can’t sit still! So he goes and makes the record and puts Dem Franchise Boyz on it. They brought the “snap” to the forefront. Beat Drop is all about the snap music.”

“I’m fully grown and things are much different than they would’ve been 12 to 13 years ago.”

Older and much wiser, Monica talks about what it’s like being the woman is behind the music. “I took control once I started working on After the Storm. Controlling my own destiny forces me to do things differently. I look forward to acting. I look forward to expanding my family. I’d have 3 or 4 more kids. I look forward to so many things that people probably don’t expect from me.” 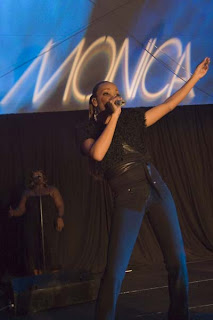 Monica’s been really quiet lately. There has been no drama coming off the Monica radar. She has a beautiful life, a new album, new child and a fiancé’. Who and what would make a woman floating on cloud nine come crashing down with a vengeance? New York radios host Ms. Jones.

In an on-air interview with Ms. Jones, the radio host lets her know that she didn’t like the newest single Beat Drop. Not taking it personal, Monica accepts her criticism like a professional without drama. However, after leaving the Hot 97 studio is when Ms. Jones goes on to rip the songstress apart and attack her personally. Monica explains the situation as, “She was disrespectful by talking about things that I can’t control, like I’m too skinny.”

To Ms. Jones, “I was the same weight that I was when you met me 12 years ago, so why now are you trying to increase ratings? Are you trying to be a shock jock, because there’s only one Wendy Williams and I respect her cause if she has something to say she says it to my face.”

Monica explains, “I think she was confused and thought I was offended that she didn’t like my song (Beat Drop). I don’t care about that. I thought that was fine. Lots of people like to hear me sing. They don’t want me to do fun upbeat young records like that.”

“We met before and I’d shown her love because that’s what I do but there are boundaries. I’m fully grown and things are much different than they would’ve been 12 to 13 years ago. Everybody knows how I get down so I try to keep myself drama free cause it could get real stupid.”

In a manner befitting of a lady, Monica, addresses the radio host, “It’s a small thing to a giant and I don’t have any business fueling something that so petty. Being a shock jock doesn’t work for everybody so maybe you should take your own direction, find your own lane and stay in it. You were an artist first and that didn’t work. “

“It’s done as long as she doesn’t speak on me again. “
Music

Anonymous said…
Thanks designed for sharing such a fastidious idea, piece of
writing is fastidious, thats why i have read it entirely

Anonymous said…
I was excited to find this web site. I need to to
thank you for ones time due to this fantastic read!
! I definitely savored every bit of it and I have you book marked to see new
things in your web site.

Anonymous said…
I loved as much as you'll receive carried out right here. The sketch is attractive, your authored material stylish. nonetheless, you command get got an edginess over that you wish be delivering the following. unwell unquestionably come more formerly again since exactly the same nearly a lot often inside case you shield this hike.

Anonymous said…
Hi! This post couldn't be written any better! Reading this post reminds me of my previous room mate! He always kept talking about this. I will forward this write-up to him. Pretty sure he will have a good read. Many thanks for sharing!