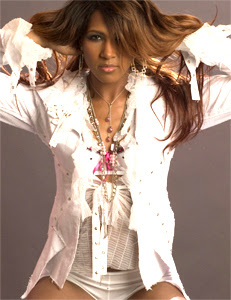 “You can call me Terri. That’s my real name.” answers the quietly beautiful Terri Vaughn when an overly anxious fan greets her as ‘Lovita’. In a voice unfamiliar to anyone who’s a fan of the 1996 sitcom hit The Steve Harvey Show, that nasally high-pitched voice of Lovita Alizay Jenkins is now gone and replaced with the calmingly deep tone of a mature woman who’s long since moved on from pouring chocolate sauce all over her “Ceddy Bear.”

Fast forward and you’ll find that Terri Vaughn has just wrapped up filming the movie Three Can Play That Game alongside cast mates Toni Rock, Jason George, Vivica A. Fox, Jazsmine Lewis and Melissa Ford. Her character ‘Linda’ is exact isn’t the familiar ghetto-fabulous diva that we love from Terri. Linda is, “…so fun! She’s a business woman and…she’s not ghetto [this time].” And accepting that her portrayal of the round-a-way girl on the Steve Harvey Show is what made her face more recognizable than any other role she’s played thus far, Terri happily reminisces about those days.” I loved that role and I’m so happy it touched and made an impact on so many people. That means I did my job.”

A native of San Francisco and now living in LA, Terri hasn’t strayed too far from home to make it big. fourteen years ago when she started acting, her aspirations took her to the stage with her first gig on a David E. Talbert’s touring stage production Tellin It Like It Tiz, “It gave me my chops. We did eight shows a week and twenty cities” Tellin It Like It Tiz launched Terri’s career as an actress along with Kellita Smith (The Bernie Mac Show) who also appears in the movie Three Can Play That Game. But in the future, if it be Terri’s will, she’d be back on TV in her ideal role. “I love romantic comedies. I would love to do a television series that is a romantic comedy and be the lead and not just the side girl.” And even though she speaks with a wide grin when talking about her dreams, we can’t forget Terri’s enormous display of creative versatility when she shocked Showtime’s Soulfood viewers during a passionate kiss shared with Byrd (Malinda Williams) during a portrayal of Eva Holly, a lesbian, during her multi-episode guest appearance.

So for anyone considering a lifestyle in acting, Terri advises, “Study your craft. Go to school…You’re gonna be unemployed more than you are employed. It’s very uncertain and unstable. It’s a crazy life.” And with her free time in between acting gigs, she enjoys being mommy to her 8 year-old son and working with her foundation ‘Take Wings’, a non-profit organization that mentors teen and pre-teen girls in the San Francisco Bay area poverty stricken areas.

After growing up in the projects of San Francisco, Terri was affected by the gang and drug infested environment that could surely swallow the weak. “I grew up in the ghetto and had friends killed by drugs and gang violence when I was a teen.” A proud example that you don’t have to be a product of your environment, Terri is now in the process of getting ready for their 5th Annual Fundraising Gala in August. The event will be hosted by none other than Cedric the Entertainer.
Entertainment