Monkeying Around with Zoe 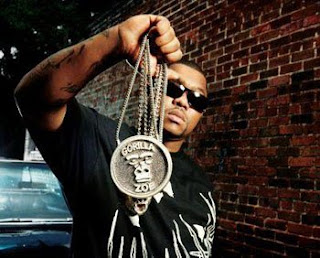 Words by Melissa A. Stewart

Please understand that if you are not here to support the movement, then move out of the way. This is the sentiment I gathered from walking into the inconspicuous Block Entertainment office which is (but really doesn’t have to be) located in one of Atlanta’s most famous hoods. Emblazoned on the doors in the office is a note explaining that Gorilla Zoe is the priority right now and everyone has to be on board or jump ship.

I find Zoe looking refreshingly slim in the studio with an entourage of producers, artists, DJ’s and friends. I could help but to comment on his weight loss. It’s no secret that he wanted to lose weight. Starting at 245 pounds, Zoe encourages others to follow his routine of drinking lots of water throughout the day and eating about four small meals to keep the hunger down and the energy up. He also insists keeping the sodium and sugar to a minimum and offers these tips, “Get on the treadmill and pop in a DVD and watch a good movie while you walk. That time will go by fast. “

Fortunately time didn’t stand still and we didn’t have to wait too long for the self named primate to drop another album. Last years success from his debut, ‘Welcome to the Zoo’ peaked at number #3 on Billboards Top Rap albums chart. He set the tone with his rough intimidating voice and fans immediately fell in love with it. But with much success the pressure is always on with the sophomore album. ‘Don’t Feed the Animals’ now feeds a staff and everyone at Block Entertainment Studios is working hard to see that Gorilla Zoe is a success. He understands the pressure and rises to the occasion and he humbly appreciates the effort. “Now, I’ve tasted success and been around the world, but I’m still hood. I’m hood rich and I’m telling my story from that point of view.

Zoe transcends his healthy lifestyle to putting his energy in to ‘Don’t Feed the Animals’. Not for nothing, but Zoe delivers with his sophomore album ‘Don’t Feed the Animals’ which debuted on March 17th. Using what he now knows to be his most powerful instrument- the voice, Alonzo ‘Zoe’ Mathis cranks his talent up a notch by issuing a forewarning that he’s not to be underestimated or underrated. He recognizes that his voice is his signature and says, “I actually learned that’s what people like most about me. Since I found that out, I’ve perfected the way I use my voice. It is my instrument.” Gorilla Zoe brings it. He explains his growth, but also notes, “My writing ability has gone through the roof. The production and the way I deliver on this record is so big.”

With club bangers and highly rotated singles ‘Lost’ and ‘What It Is (featuring Rick Ross and Kollosus)’, Zoe introduces listeners and fans alike to what he describes as a breath of fresh air. “It crazy; nothing sounds like it…it’s so street, so hood and so new!” …and like a kid with a brand new toy he says, “You wanna hear it?” In between songs, I got a first class seat to the maturation of Gorilla Zoe.

So I’m having my own listening session and I see that there’s something for the hood figgas’; something for the ladies and some things that you have to simply put in heavy rotation. But as a lady, what can Zoe say to us that can get our attention? ‘I Got It’. What woman doesn’t want a man to assure her that he can insure her? He explains, “Whatever you want and need; I got it. Whatever it is in the world, I can deliver. You know why, cuz I got it…”

For the men, the guys in the room nodded their head and put their hands in the air for the next hood anthem “Shit On ‘Em’! Now I’m thinking he had to be high to come up with this. According to Zoe, “I was high! I was thinking bout shitting on some niggas.”

Figuratively of course, but according to Zoe, a great deal of thought was put into doing this song. “These niggas flexing and putting on and just doing it for himself and aint helping the crew out. He aint collabing or fucking with nobody else. He don’t wanna meet up with niggas like us. You gotta face us. We coming to take yo’ place. They can’t go nowhere alone. The song was pure fun, but we can walk around the city fully iced up with ten twenty stacks. No security. Just respect. We real niggas just like them. Everybody know me. I can walk in the club by myself. Why I need security when I went to school with everybody in the crowd and the security guards.”

So after listening to the song, it was absolutely necessary to inquire about the relationship between the two. With his entourage still in the room, eyes and ears were peaked for his carefully placed answers.


Gorilla Zoe doesn’t letting his celberity allow him to stray too far from his roots. With songs like ‘Man I’ and ‘Dope Boy’, he’s able to relate to a wayward youth who matures into a man looking to improve his quality of life all while enjoying the fruits of his labor and keeping those in the struggle in mind that their day will also come.

In all, Gorilla Zoe sees himself as the hood spokesperson and keeping his music relative to the streets while showing his growth is what he’s about.

‘Don’t Feed the Animals’ is now in stores.