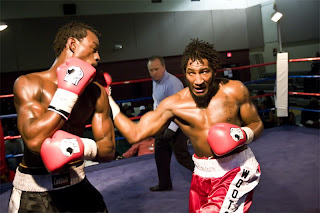 Atlanta is known for many things. When it comes to entertainment, the city is always buzzing with to-do's. However, one question we haven't asked is where can we go to see a good fight.

Silverback Entertainment emerged to remedy the need to display a good ole fashioned butt whooping and its founder Frederico Jones, a former boxer chose to promote these fights when he noticed the sport was under served in Atlanta market.

So strap on your boxing gloves and brace for a fight. Fight night will host a both men and women bouts as the night builds up to the Bull-MENGOTTI main event smackdown. The home team fighters representing the red corner are hungry and ready to meet their opponents to take home a K.O. win of the night. Their motivation and rage for the opponent is likened to the eye of the tiger but the rage of a charging bull.

Tickets go on sale Monday, April 20, 2009, at www.ticketannex.com. General admission is $25, VIP is $35, and $5 for kids 12 and under. This is guaranteed to be another exciting evening of boxing in the heart of the Auburn district during the 25th Anniversary Celebration of the Sweet Auburn Festival.

Visit Silverback Entertainment on the web at www.silverbackboxingevents.com.