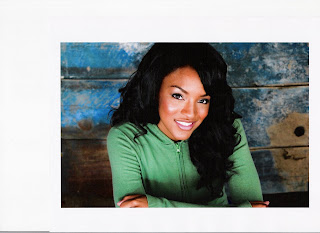 Not that they needed more diamonds in the treasure chest, but Slip N Slide Records just added another jewel to the cluster. Drew Sidora, singer, songwriter and actress has no qualms about taking her spot in line with a roster of stand alone hit makers like Trina, Trick Daddy, Plies and Rick Ross. Although, she’s a little different than the most notable Slip N Slide alums, Drew is the first pop artist on the label and is so excited about where the label and her label mates will hang her star.

Not that they have any background in Pop music, Drew seems to think its all good on the Slip N Slide front. “They’re a boutique label; an independent that was interested in me too. Having never been to Miami, they signed me over the phone I’ve already put out two singles with the label. A larger label would have shelved me for at least a year. They’ve [Slip N Slide] taken the time to understand me as an artist and allow me and my team to basically be in the drivers seat.”

When thinking about being a part of the team, Drew recalls her first time at Slip N Slide as pulling up to someone’s crib. The office is actually a house with the family feel that most artists are promised, but rarely find.

“In fifteen years, they’ve only put out four artists (Trick Daddy, Trina, Plies & Rick Ross) and they’ve all gone platinum plus. They go really hard for their artist.”

Under the Slip N Slide label, Drew has already released two songs to her credit. Not Alone and Banana Split are both up tempo girl next door anthems. Not Alone was inspired by the breakup between Drew and long time boyfriend Yung Berg. Speaking briefly on it, Drew says, “Having to grow up under the magnifying glass is hard; we all have to find our way and learn who we are as a person. After sometime, the disrespect must stop and its time to grow up and move on.” And with that, fans can look forward to the next single with Missy Elliott called Ladies Go.

The pending album, which remanes nameless for now is slated to be a painted portrait of who Drew Sidora really is. “I’m funny, sexy and a comedian. You should be able to get all of that on my album. My album is a voice for young people who don’t have a voice.”

Drew didn’t make her mark as a singer from the jump. Like many music artists who later choose acting as a second career (Beyonce, Will Smith, Ice Cube…), Drew hit the big screen first and made her name there as both an actress and musical artist on the soundtrack end as a writer. She’s shared the big and small screen with the likes of Martin Lawrence, Raven Simone, Zac Efron, the Wayans brothers and Tyler Perry and penned many tunes for Disney and others.

Drew Sidora is no rookie in the entertainment business. With other notable appearances and credits under her petite size belt, she’s flexing her vocal muscle in a different direction. She’ll still continue chasing her big and small screen dreams and you’ll see her reprising her roll on as Haley Davis in Wild Hogs 2 and other upcoming film projects (Killing of Wendy and B-Girl).

For those of you who are fans of the CW’s hit TV show The Game, don’t count Drew out just yet. The scene stealing siren could be making a comeback. Drew became famously known as the woman that snatched the innocence right out of Melanie and Derwin’s flawlessly perfect relationship. Playing herself, Drew set the blog sites on fire when she stepped on set. Fans won’t soon forget the sexy, boyfriend jacking diva that sent the show in an entirely new direction. Drew appeared in only a few episodes with ‘The Game’, however, the show posted record numbers for each episode and the shows’ season finale and following season premiere also pulled in high ratings as well.

Not bad for a preachers kid. For more Drew Sidora, feel her out at www.MySpace.com/drewsidora.