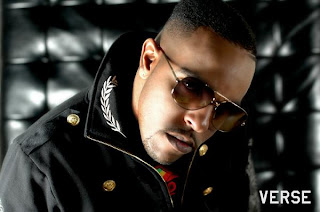 Now we’re always on the lookout for a new breed in the game. So when I got word of Interscope Recording’s newest family member, it was worth a go-see for me.

Verse Simmonds is a Virgin Island native by way of the Florida sands. Coming with him is the island flare with seductively street delivery in his musical genre called Island B. His music is reminiscent of Caribbean influence, R&B and hip hop.

In old fashioned listening party style, we crammed into the Locker Room studios in the rustic Mechanicsville section of Atlanta to have a listen. A gracious host and artist, Verse gave a sneak peak of his new mixtape The Sex Tape Chronicles. So, I’m thinking he’s read a few too many Zane books, but at least he kept the bold and sexy theme.

Forming his own image, Verse says The Sex Tape Chronicles is something he can control on his own while he carves out his persona for all to see. “Too many artists are sitting out right now. I’m coming with a Bob Marley version of R&B.

Don’t get it twisted. It’s not chill music. Verse wouldn’t recommend listening to The Sex Tape Chronicles alone. It’s definitely music for two or at least motivation to seek out a second party. In the single ‘Intoxicated Text’, Verse delivers a bold booty call that will try your patience but guarantees satisfaction. Verse is set to shoot a video in mid to late July for ‘Buy You a Round’. This single has been tearing up the club circuit and is a sure happy hour anthem.

To experience Verse for yourself, see him on Youtube or at MySpace.