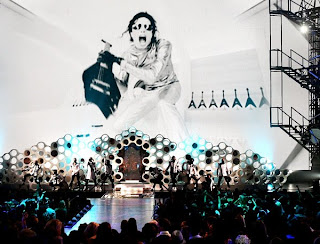 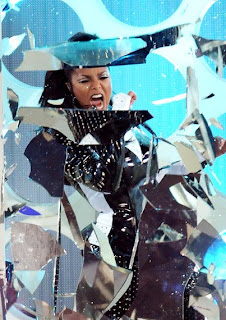 It wouldn’t be right to start the night off without remembering the man who basically put MTV on the map. The night belonged to Michael Jackson and in making it so, a myriad of song and dance numbers were dedicated to him. The dedication was topped off by Janet Jackson who performed the hit “Stop Pressuring Me’, a duet she and her brother Michael performed together. It was met by a standing ovation and dancing in the aisle.

Long live the King of Pop. 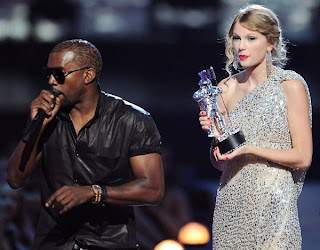 When delivering the first moon man of 2009 for the best female video, Taylor Swift was making an exceptionally humble acceptance speech when Kanye West so rudely approached her on stage, took her mic and announced Beyonce’ had “…one of the best videos of all time”. In utter disbelief, Taylor like everyone else stood speechless until he gave her the mic back and exited stage right.

The look on Beyonce’s face…utter disbelief! You could read her thoughts. “How unnessesary…that’s just wrong…I can’t believe this fool…oh Lord!”

Seriously, the boy must be stopped. His immature antics are not funny and will soon get his ass whooped and have him banned from every major awards show on tv. But he did it now. He went and messed with a good ole country girl and you know how country folks feel about them there colored folks. You know the country stations will be calling for a good ole fashioned whipping to teach that boy a lesson. Kanye, I love your music but for once, I agree with the good ole boys.

When the lineup for Best Male Video was announced by Diddy (and that other guy), it was no surprise that Kanye was nominated and when his name was mentioned as a nominee, he received unanimous boos from the audience as they began chanting, “Taylor…Taylor!”

He was amongst other deserving nominees such as NeYo, T.I. and Eminem. Personally I feel like Kanye won, but they changed the envelope at the last minute in retaliation for his bad behavior! Shame on you Kanye, you need a muzzle and a shock collar. T.I. got the moon man and it’ll surely be waiting on him when gets released from the clink!

By the way, when announcing the winner, Diddy gave a shout out to T.I.’s wife! What you talking bout Diddy?

Beyonce's Performance – Put a Ring On It

B had the audience up on their feet and waving their ring fingers and shaking their hips. She did her thing.

Did Solange cut off all of her hair? Not a good look! Some people just look better with hair and you were one of them. Solo girl, get a wig. B got plenty. 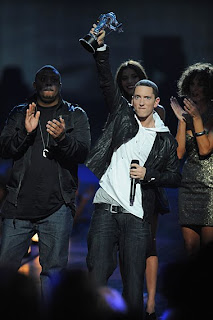 Presented by Tracy Morgan and Eminem


Video of the Year

Beyonce – Single Ladies
Eminem – We Made You
Lady Gaga – Poker Face
Kanye West – Love Lockdown
Britney Spears – Womanizer
…and the winner is Beyonce! She in her own classy way invited Taylor Swift to come back out onstage and have her moment that Kanye took at the beginning of the show.
“Maybe we can try this again.” Said Taylor as she began her humble thanks. 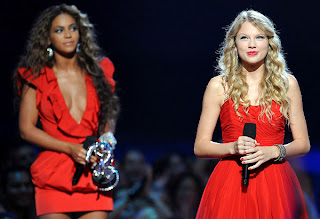 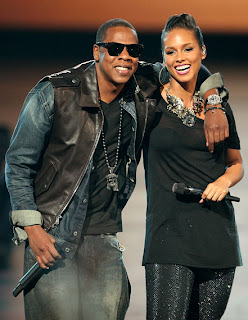 The performance was classic but what was Lil Mama doing walking up onstage at the end like she did something? Anyone else confused by that? It's not even worth the photo op.