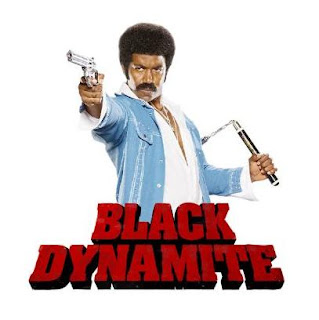 The first three minutes of the movie, I’m asking myself what the hell? But I chose to stay put and see this through.

I’ve seen blacksploitation movies that played into stereotypes of black people that made us look like we had overly big lips, loud, uneducated, poor and unethical. This movie was the 2009 version of the 1970’s mixture of Shaft and Dolomite. Black people were conscious, proud and well educated. Not educated in the sense of well-schooled, but aware and not illiterate.

Not for the beaugois or uptight, Michael Jai Whites’ depiction of Black Dymamite is raw and uncut in every sense of the word. Bitches are called by their name, Bitch. Prostitutes are proud and in hail their pimps. Nudity is generous throughout. This is truly rated R and not suitable for children or anyone not mentally grown as hell.

With an all-star cast, everyone played their part. Kim Whitley, Tommy Davidson and host of others will leave you forever quoting phrases that will age you but speak your point in the most creative way imaginable.

Expect to laugh out loud from beginning to end and even learn a lesson or two with the many subliminal messages throughout. Black Dynamite is worth the fuss. Spend the money.