Seal It With Rose'

Moët & Chandon, the world's most loved champagne and the Bright + Cook Agency partnered with Garner Circle PR to introduce Moet’s Nectar Imperial Rose’ to a newer generation of young and hip tastemakers. The invitation-only, daytime soiree took place at Atlanta’s Aja restaurant with a perfect mix of celebrities and the culturally appreciative.

Atlanta was selected as the choice city for the launch of the "Seal it with Rosè" brunch concept. With its ongoing list of celebrity inhabitants and prominent blend of music, culture and culinary cuisine, Atlanta provides the perfect mix for this concept. Keith Howard, Senior Brand Manager for Moet summed up the event by saying, “The concept was wrapped around the excitement of Valentines Day…Seal It With Rose’ was formed out of the phrase seal it with a kiss but add Nectar Rose’ and the love and sexiness of the holiday.”

“Moet wants to do more to say thank you and to provide a vibe that’s new and fresh. So we chose Atlanta for its vibrant nightclub scene, but decided to develop a new concept by promoting the day party.”

The mood at mid day was upbeat, the look was light, fresh and chic and the red carpet was always a buzz. Partygoers toasted Nectar Rose’ with Raheem Devaughn who gave a stellar performance while Kenny Burns played host for the afternoon. Other celebrity guests included Usher’s former wife Tamika Raymond, rapper Fabulous, Seattle Seahawks Deion Grant, Why Did I Get Married Too star Denise Boutte, Sheree Whitfield of Real Housewives of Atlanta and more.

See images from the Moet & Chandon's Seal It With Rose event. 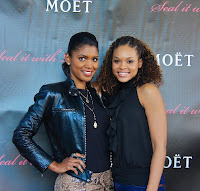 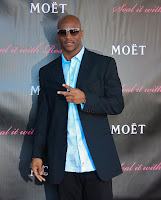