One thing magazines love to do is call dibs on who will be the new "It" celebrities in the year to come. Sometimes they pick stars whose careers are destined to take off, occasionally they make incredible calls with near-nobodies who later become A-listers, and usually the majority of their picks fade into oblivion. While we'd like to think celeb bible Vanity Fair puts a great deal of thought and planning into its annual "New Hollywood" issue, this year the editors really limited their scope when it came to choosing the next big stars. (Or perhaps they overemphasized the "Fair"? ) Every woman on its new cover is extremely thin and very, very white. Unless Vanity Fair considers one redhead to be diversity, we feel the need to cry foul. 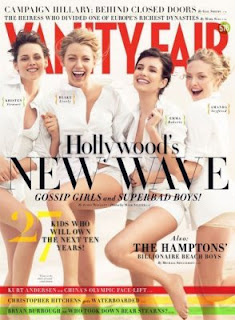 The cover of the March issue features Abbie Cornish, Kristen Stewart, Carey Mulligan, Amanda Seyfried, Rebecca Hall, Mia Wasikowska, Emma Stone, Evan Rachel Wood, and Anna Kendrick. Many, if not all of these women have good reason to grace the Vanity Fair cover, and to be a part of what they have dubbed "the fresh faces of 2010." Evan Rachel Wood has garnered critical acclaim since her Golden Globe-nominated performance in 2003's "Thirteen" as well as loads of media attention from her highly publicized romance with rocker Marilyn Manson. Kristen Stewart was catapulted to fame by the mega-successful "Twilight" franchise and will star as Joan Jett in the upcoming film, "The Runaways," while Amanda Seyfried's career was put in motion after her role in 2008's "Mamma Mia!" But WAIT: Vanity Fair already had both Stewart and Seyfried on an August 2008 cover touting "Hollywood's New Wave." And this was also a white-girl-only cover. Were there no promising young actors of color who could have been featured in either issue?

Though it's true, Young Hollywood is predominantly Caucasian, we can think of a slew of non-white, non-rail thin actors who made a splash this year (Gabourey Sidibe from "Precious" anyone?). In the accompanying article, Vanity Fair writer Evgenia Peretz calls out the young cover stars by their best attributes: "downy-soft cheeks," "button nose," "patrician looks and celebrated pedigree," "dewy, wide-eyed loveliness," "Ivory-soap-girl features."

Roles for black, Asian, and Latin actors are scarce in Hollywood, but surely Sidibe, Zoe Saldana of "Avatar" and "Star Trek," and Freida Pinto of "Slumdog Millionaire" are having their moment. Vanity Fair may have been looking for the most promising batch of talent for their issue, but they should have been looking for a diverse group of women as well.
We reached out to Vanity Fair for comment, but as of publishing time they did not respond.

Here are black women in Hollywood and what they think of the disparaging difference.