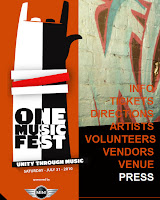 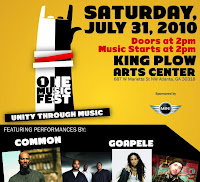 King Plow Events, One Stop Productions and Sol Fusion have formed an alliance in order to produce ONEMusicFest, an annual interactive outdoor live music experience. This event is expected to attract thousands of people and expand throughout the 4 acres of King Plow Arts Center.

Fully supported by Mayor Kasim Ried, Director of Cultural Affairs Camille Ruffin represented for the Mayors’ Office and presented the trio with the city’s esteemed Phoenix Award, the highest award issued by the mayor.

The press conference offered a diverse panel discussion from radio DJ’s to event promoters who all had valid supporting issues for seeing this project through to a successful end. In all, the One Music Fest: Unity Through Music Concert Series will host bankable acts like Common, De La Soul, The Mad Violinist, Mick Boogie and more. The DJ booth will be a jambalaya of talent from Applejuice, DJ Cha Cha, DJ Kemit, Captain CRUNK and more. What Unity Music Fest will not offer is a the same ‘ol song heard by your top 40 radio stations.

Speaking on the maturation of Atlantan’s and how they expect the city to receive the concert, co-founder Christian Ruffin said, “We all have to grow at some point…it’s the one universal language…you fallin love the music first and you go back to listen to the lyrics later.”

Promotion for the concert will be largely done via social media networking on Facebook.com and Twitter, but you can also check online with OneMusicFest.com for the latest information and concert information.
Here’s more of what you should know:

ONEMusicfest, modestly speaking, is an intimate (5,000+ person) indoor/outdoor music festival that will showcase over a dozen performances. It will be a first for the city of Atlanta.

King Plow Events, One Stop Productions and Sol Fusion have formed an alliance in order to produce ONEMusicFest, an annual interactive outdoor live music experience. This event will attract over 5,000+ people and expand throughout the 4 acres of King Plow Arts Center.

Join us in welcoming ONEMusicfest, complete with 12 hours of music featuring national and local artists, Live Art, over 10 DJ’s, 6 hours of open bar (VIP tickets), food, an Art Expo and festival style fun! Get your tickets ASAP! They won’t last!

Unknown said…
I'm glad to see some music shows with substance making a comeback. There is an audience for intelligent music lovers out here.
July 15, 2010 at 11:28 AM