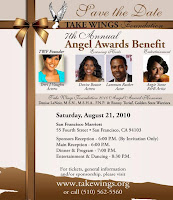 On Saturday, August 21st the Take Wings Foundation will be honoring Ronny Turiaf at the 7th Annual Angel Awards Benefit hosted by actress Denise Boutte and actor Lamman Rucker. The event will take place at the San Francisco Marriott beginning at 6:00 p.m. Entertainment will be provided by R&B artist, Angie Stone. See below for more event details and to purchase tickets.

Terri J. Vaughn has successfully entertained us on television for more than ten years. First, she stole America’s heart with her lovable portrayal of Lovita Alizay Jenkins on “The Steve Harvey Show.” Vaughn confesses, “I loved playing a character that grew up in the ‘hood and who worked hard to be positive because it was very close to my own life.”

After that, Vaughn made her way to UPN’s “All of Us.” With her fun, energetic and wise portrayal of Jonelle Abrams, she once again brought life and laughter to the small screen. Now she brings Renee, a sexy, sassy and hilarious nurse, to life on Tyler Perry’s Meet The Browns. But, before Vaughn ever had her first audition, she was growing up in a housing project in Hunter’s Point in San Francisco.

Today, this woman is hell-bent on creating positive, inspirational experiences for other young women growing up in the projects. Out of her desire to give back to her community, in 1997, Vaughn started Take Wings Foundation. “We motivate, uplift and inspire young girls, 13 to18 years old, growing up in at risk communities and foster care, in the San Francisco Bay Area, to be positive, productive and successful. It’s truly amazing to watch them soar.”

This year, Take Wings Foundation (TWF) nvites you to participate and/or be a sponsor at the 7th Annual Angel Awards Benefit” to be held on Saturday, August 21, 2010 at the San Francisco Marriott, 55 Fourth Street, San Francisco, California.

The proceeds from this event will be used to primarily fund programs and scholarships for inner city young women who complete all phases of the TWF program, and who are going to college to further their education. Equally important is that once a TWF graduate is in college, she can apply for scholarships each year until she graduates from college. This year our goal is to raise $75,000. Together and with your support, we will accomplish these goals.