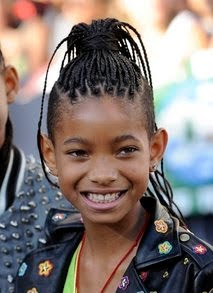 The youngest on the Will & Jada totem pole is making her stamp on the industry with her new debut as a recording artist.

Willow Smith has signed a deal with Jay-Z's label, Roc Nation and the first song released is entitled "Whip My Hair."

Jay-Z says it's rare to find an artist with such talent and creativity at Willow's age.

Will Smith first gained fame as a rapper, but unlike her father, Willow is singing on her record. However, like her father, she's a double threat: Willow appeared in the movie "I Am Legend," with her dad.

charise said…
Hmmm. So after listening to this song and the repeated attempts by bloggers to "Rhianna-ize" this child.I came to the conclusion that this song sounds much too mature for a 9 year old. And what 9 year old has "haters"? When her next single/album comes out what will she sing about? love, relationships, more haters?? I think it's silly. I think maybe Will and Jada should wait until she is a teenager at least, or have her do some acting if they want her to start a career...just my opinion.
September 9, 2010 at 4:20 PM

Tonya Franklin said…
So, it think it's a catchy little beat and young kids will definitely be on it. But i am concerned about the hair whippin, haters and parties - i mean a 9 year-old?? Really??!! I guess that makes me one of the "haters."
September 9, 2010 at 7:10 PM