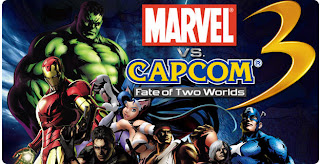 Gamers and entertainment figures alike descended upon Ambient Plus Studios for the ultimate face off when Konsole Kingz brought the Marvel vs. Capcom 3 Atlanta "Fight Club" preview to Atlanta.
After a decade of waiting, iconic Marvel and Capcom characters joined forces again in a re-envisioned team fighting game for a new generation. The shoes of legendary characters from both the Marvel and Capcom Universes were filled as gamers battled in a living comic book art style powered by Capcom' s MT Framework, an advanced version of the graphics engine used for Resident Evil 5. Marvel vs Capcom 3 "Fate of Two Worlds" is scheduled for release in the spring of 2011.
Celebrity gamers came out to celebrate and test drive the new games. Enthusiasts named are: Brian Michael Cox (Grammy Award Winning Producer), Slim (Formerly of 112), Stevie Williams (Pro Skateboarder), Laws (J.U.S.T.I.C.E League/Warner Music Group), 3D (Rap Group, Sons of Boxer Roy Jones Jr.), Young Bertell (Capital Records Artist), and Jason Allen (Capcom Rep.) to name a few.
If you too are a gamer, join the conversation at hashtag #MarvelVSCapcom3.

Anonymous said…
Just desire to say your article is as astounding.
The clearness in your post is just nice and i can assume you are an expert on this subject.
Well with your permission let me to grab your feed to keep up to
date with forthcoming post. Thanks a million and please continue the enjoyable
work.