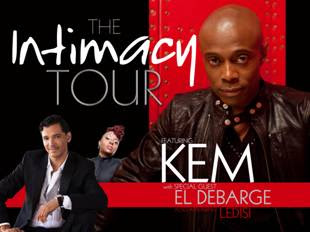 A galvanizing live performer, who commands the stage with his soulful vocal ability and captivating stage presence, KEM promises to deliver a standout live experience not to be missed. In addition to revisiting popular classics such as “Love Calls” and “I Can’t Stop Loving You,” the Detroit native will also showcase new favorites from Intimacy, including the powerful lead single “Why Would You Stay,” which is nominated for Best Male R&B Vocal Performance and Best R&B Song at the 53rd Annual Grammy Awards, airing on February 13, 2011 at 8 pm ET/PT on CBS.

The first two singles from Intimacy have saturated urban AC airwaves at radio: “Share My Life” is currently ranked in the Top 10 of the Mediabase Urban AC chart and is destined to become a wedding anthem for generations to come, while “Why Would You Stay” is holding steady on Billboard’s Heatseekers Songs chart and on Billboard’s Top R&B/Hip-Hop Songs chart. “Why Would You Stay” also hit No. 1 on the Mediabase Urban AC chart for six (6) weeks and was No. 1 on Billboard’s Adult R&B chart for three (3) weeks.