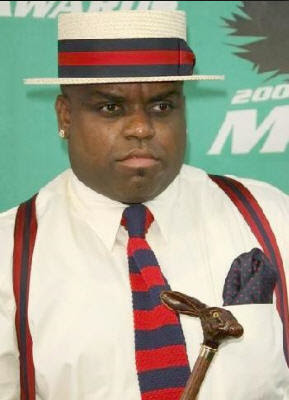 The video’s creepy visuals depict Cee-Lo as the “Lady Killer” serial killer who targets beautiful women and collects his victims’ shoe heels as a memorial.

And how does his character feel about himself? Oh, he thinks he’s hot stuff:

“My name is not important, and I’m often asked, what do I do for a living? I answer, I do what I want. Spontaneity is the spice of life and I’ve indulged quite a bit, but I’m not above the law and I’m certainly not lawless. But when it comes to ladies…I have a license, to kill.”

After living an indulgent life of brutal murderous crime, he’s met with an equally brutal woman, portrayed by Janelle Monae.

Without telling you the ending, let’s just say he’s met his match and the Lady Killer doesn’t kill again.

Also in the making, the former Dungeon Family member will be joining Rihanna on the upcoming LOUD tour with him as the opening act.

“I want to thank Rihanna for inviting me on our version of 50 First dates, only difference is she’s unforgettable fine. Don’t tell her I have a crush on her, don’t wanna mess everything up. But honestly it’s an honor and a blessing to be able to go out with a talent such as hers and I look forward to doing my part to make the tour unforgettable for the fans that come out and see us,” Cee-Lo commented.

The pair will be touring to 17 different cities around the country.