Ice Cube Joins in on '21 Jumpstreet' Remake....and we have a new 'Wonder Woman'

by Ethan Anderton - A connoisseur of all things entertainment business-related, Ice Cube is currently in negotiations to join Sony’s upcoming 21 Jump Street film. Reports are surfacing that Mr. Cube is poised to take on the role of precinct captain (a part turned by Steven Williams in the television series). If the deal goes through, the former N.W.A. member turned actor/writer/producer/director will join a cast that already features Channing Tatum and Jonah Hill. Directed by Phil Lord and Chris Miller, 21 Jump Street is scheduled to begin shooting this April with a March 16th, 2012 release in mind. For more on the film, check out an interview Steve did with producer Neal Moritz by clicking here.

In addition to potentially joining 21 Jump Street, it looks as if Ice Cube is also getting things in order for a new project he wrote entitled Chrome and Paint. For more on that film, hit the jump.

ice-cube-imageAccording to Deadline, Ice Cube is currently shopping his original script Chrome and Paint as both a starring and directing vehicle for, you guessed it, himself. The report suggests that Cube would like to have the film in place at a studio within the next two weeks, just in time to shoot in late summer of this year.

In case the title hasn’t shed enough light on the project’s contents, Chrome and Paint centers on the world of car customization in South Central L.A. Deadline refers to the project as a “gritty Boyz N’ the Hood-style drama” and describes its subtext as pertaining to “the temptation to place materialism above all else.”

If all goes according to plan, Chrome and Paint will act as Ice Cube’s first feature directorial work since 1998’s The Players Club. Most recently, he directed the documentary Straight Outta L.A. as part of ESPN’s terrific sports-documentary series 30 for 30. As for his acting career, Cube has an upcoming role alongside Woody Harrelson, Steve Buscemi, Ben Foster, Sigourney Weaver, and Robin Wright in Oren Moverman’s crime drama Rampart. He is also slated to appear alongside nearly every citizen of Hollywood in the romantic comedy New Year’s Eve.

Her last television endeavor didn’t turn out all that well since Fox canceled Lone Star all too soon, but now actress Adrianne Palicki has landed a huge role on NBC. Deadline reports the Friday Night Lights star will be Wonder Woman in the new TV series adaptation that has been set up at NBC. 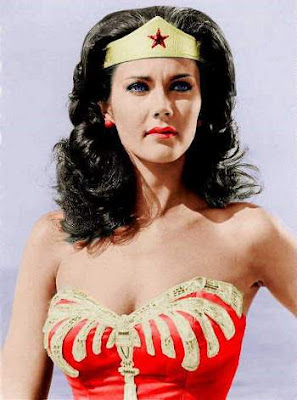 The project was revealed with David E. Kelley behind it last October, and while it was said networks weren’t interested in January, NBC came in and picked up the series to pilot with Jeffrey Reiner at the helm. Since he was also a director/executive producer on Friday Night Lights, that may explain why Ms. Palicki got the job. Anyway, now that we have our Wonder Woman, all we can do is wait to see how the new series turns out.

Chris Kaltenbech of the Baltimore Sun caught up with Carter, who turns 60 in July, at her home in suburban Washington, D.C. Although concentrating on her singing career — her most recent album, "At Last," is available on iTunes, and she's preparing to release another in April — she took a few minutes to talk about Palicki's casting and her ongoing relationship with Wonder Woman.

What do you think of the casting?

"I think it is an amazing role to play. I know she is going to be really nervous about it, just because you would be. But I have a lot of confidence in [writer] David Kelley and what he's going to come up with. David Kelley's so talented, and that's really where it needs to be, is in the writing.

I spoke with David yesterday, and he's really really excited about it.

I think the story needs to be retold. It needs to have a fresh look at it. It affected a lot of people. I think it's time, I think it's important to have it out there again.

Is there any advice you'd offer her?

Is there any chance that you might be approached for a cameo, or any kind of role on the show? Have you and David talked about that at all?

That is something that I…Even if I were, I couldn't tell you.

You wouldn't say no right off the bat, let's put it that way.

Anyway, this is on NBC, right?

So, now 'Wonder Woman' will have gone from ABC to CBS to NBC. She is pretty cool, because she has hit all three networks.

Do you ever find it amazing that, what is it, 35 years ago …

It's a long freaking time.

Do you ever find it amazing that you're still so clearly, so heavily identified with that role?

I do. When young people recognize me, I'm always floored, absolutely floored.

But it's been going on a long time. I think it's just a reflection of how people felt about the character, much more than how they felt about me in particular. The character's so beloved, for a lot of reasons.

I love to hear what people have to say. People have stories and it's a way of connecting to people. I like it.

Do you ever get tired? Was there ever a period when it became frustrating, that association all the time.

No. I think, early on....I really started out as a singer, that's really what I do. But I became famous as Wonder Woman…

I realized that it's way too much work to try to distance myself from Wonder Woman. And it's no fun. She was a great, once-in-a-lifetime character to play. She really helped my singing career at the time.