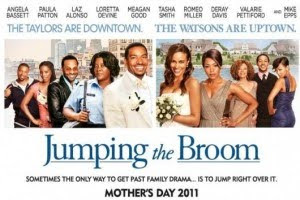 JUMPING THE BROOM
This family dramedy is one that many can relate to but few speak of. Coming from a 'have-not' side of town and marrying into the 'haves' presents a few challenges for both families. In Jumping the Broom Sabrina (Paula Patton) a young professional coming from a well-to-do family who plans to marry Jason (Laz Alonszo), a young professional who had to work hard from humble beginnings and is plagued by a mother who isn't impressed by any woman he's dated. So making it work with Sabrina, he decided to take his mother out of the equation. When Jason introduces mama Taylor (Loretta Devine) to his wife-to-be, its days before the wedding and the drama begins.

Jumping the Broom is packed with explosive personalities independent of the wedding drama. With a surprisingly impressive performance, Mike Epps offers his well-expected comedic tone. But he also presented the voice of reason and maturity to his sister Mama Taylor. Jumping the Broom is a great Mothers Day weekend movie. Mothers and mother-in-laws will laugh out loud and at this hilarious movie and will eventually be a must have in the video collection.

My Opinion
Scene Stealers: Tasha Smith and Romeo Miller offer an undeniable dysfunctional chemistry that is hilarious and unexpected.

Shocker: Mike Epps is proving the can be more than the funny man on camera. Its time he's offered the Will Smith and Denzel-esque type of roles. He's proven tried and true that he can hold his own and is bankable. 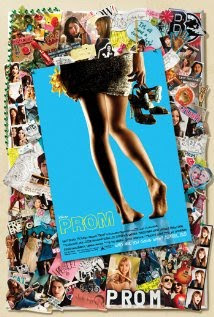 PROM
There's the dress, the tux, pictures, the little flower thing, a limo and the last night you'll ever spend with your senior class. Its Prom Night and its every girls rite of passage to feel special and princess-like.

At Prom, every couple has a story and no two are exactly alike. Several stories unfold at one high school as the big night fast approaches; Prom portrays the precarious passage from high school to independence as some relationships unravel and others ignite.

Nova Prescott (Aimee Teegarden), it's at a battle of wills as she finds herself drawn to bad boy Jesse Richter (Thomas McDonell) who gets in the way of her perfect prom. Senior classmates Mei (Yin Chang) and Tyler (De'Vaughn Nixon) harbor secrets that would effect the course of their relationships, while others face all the insecurity and anticipation that surrounds one of high school's must-be-there events.

Prom is in theaters on April 29th.