Do We Still Care About the Color of Skin? Really? 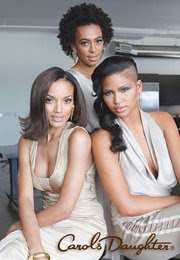 
Is it me or does the issue of black on black racism come around too often and nothing is being done about? Has anyone been reformed of their old way of thinking?

Carol's Daughter just introduced their spokeswomen and then came the hate! By signing Selita Ebanks, Solange Knowles and Cassie as spokeswomen for the brand, Carol’s Daughter is making a strong statement that polyethnic diversity is a thing of beauty — and on the rise.

What we’re doing now is moving into a polyethnic space. When I say polyethnic, I mean women who are made up of several ethnicities... If you ask them what they are, they’re going to use a lot of different words to describe themselves. That’s in line with the Census data coming out — people are checking much more than two boxes....They will serve as cultural ambassadors in bringing forth this acceptance that the definition of beauty is now colorless...There are no longer boxes of white, black, Latina, Asian. More and more women are checking the other box.

Even Women's World Daily weighed in on the subject.

Carol’s Daughter aims to showcase the customers who can’t be neatly slotted into one category or another. Take, for instance, Cassie, who is of black and Filipina descent, or Ebanks, who has Jamaican, Irish, Indian and African heritage and grew up in the Cayman Islands. Knowles is of African-American and French Creole descent.“Carol’s Daughter doesn’t have just one direct demographic,” said Ebanks. “Solange’s hair is a different texture than mine; so is Cassie’s. Our skin and body types are different. Today, people are blended, and I think the three of us are a prime example. Women in my family range from vanilla to the deepest chocolate.”

Now you weigh in!