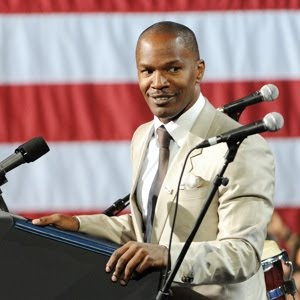 Jamie Foxx looked downright presidential as he worked the room at Hollywood hot spot Katsuya after performing at a fund-raiser for President Obama at Sony Pictures Studios in Culver City on Thursday night. Sources said the actor and singer said hello to everyone there, including strangers, as he did several laps shaking hands and kissing cheeks around the restaurant. By the time he left, Foxx had rung up a $1,000 tab of sushi and drinks with his group. He currently plays a smooth-talking bird in the new hit cartoon movie "Rio."