Whitney Houston Back in Rehab 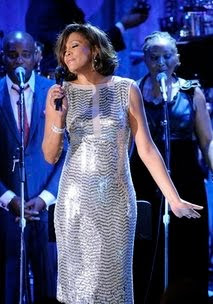 According to the Associated Press (AP), superstar singer Whitney Houston has voluntarily checked back into rehab and is reportedly undergoing treatment for her longstanding drug and alcohol addiction. For years, Ms. Houston has battled with drugs while in the public eye.

In 2007, the 47 year-old singer attempted a comeback that was short lived and not quite what she'd hoped. She claimed to be clean and sober yet while on her 2010 tour she cancelled shows and gave sub-par performances, thus leaving fans weary and some unforgiving. Event at a tribute performance for her own aunt Dionne Warwick, Houston's performance left much to be desired.

Reports have not been made available where the singer is seeking treatment and when she plans to complete her stint. Just last week she sang with Chaka Khan during Prince's concert in Los Angeles.

We hope and pray for your recovery, however long it may be. Slow and steady still wins the race.