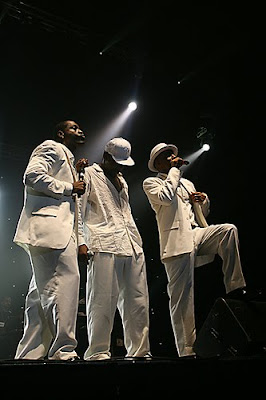 When Bobby Brown, snotty and kinetic and magnetic, left the megasuccessful R&B boy band New Edition for a solo career in 1986, it appeared as if it might have the effect of a puncture, slowly letting the air out of one of pop’s biggest phenomena. Mr. Brown was the wild card, but also the selling point.

Eventually replacing him with Johnny Gill, a rigorous and ferocious young singer, however, turned out to be a masterstroke. Suddenly, New Edition was not only cool, but serious too.

In the decades since, New Edition has tried various reunions, all short-lived, many marred by ill will. The iteration on display at the Nokia Theater on Thursday night — a splinter wing of its best singers dubbed the Heads of State, with Mr. Brown, Mr. Gill and the effortlessly tender Ralph Tresvant — was promising and well edited, a union of old-school showmen conceding little to the years gone by. 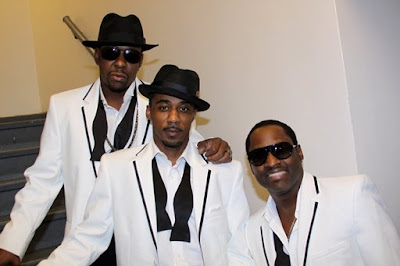 Here again, Mr. Brown was the selling point — no other New Edition member has matched his solo success or his tabloid ubiquity — and he was again unpredictable. But not erratic: if anything, Mr. Brown shelved the wounded comic persona he has cultivated in recent years as a reality-television punching bag in favor of jovial camaraderie. The least expected element of this show was that Mr. Brown was happy being just one singer in a group of three.

In an hour and a half the men worked through mostly abbreviated versions of more than 20 solo and group hits, with their dance moves at about 60 percent strength. As ever, Mr. Gill’s voice was an abrasion, all finely scratched burrs. Old age has given his vocals some of the liquidity of Luther Vandross’s, heard here on “Half Crazy,” but Mr. Gill is far more appealing as a growler. Near the end of the show, he dotted “Rub You the Right Way,” one of his signature songs, with vibrant, sharp-edged runs that turned it from seduction to aggression. (No “My, My, My,” though?)

That was followed, of seeming necessity, by a cooling off with “Sensitivity,” the biggest hit from Mr. Tresvant, whose pillow-soft vocals have been the template for much of the pop-oriented R&B of the last few years. He was lithe on New Edition hits like “With You All the Way” and “Cool It Now,” and by the time he arrived at “Do What I Gotta Do,” his shirt was unbuttoned, revealing abs Alex Rodriguez might covet. One woman in the audience licked her finger and pressed it to her own chest, hissed seductively, then screamed, “Hot!”

And where was Mr. Brown in this weather system? Still combustible when needed: grinning during the bratty rap section of “Every Little Step” (New Edition never needed to import rappers onto its songs; the members happily rhymed themselves); leaving the stage before “If It Isn’t Love,” proclaiming, “My doctor said I could not do this song,” then reappearing midway, sliding into the dance routine.

“I am the diabolical Bobby Brown,” he said, exhausted, before an excellent midshow run of songs in which the three men performed on stools, storyteller-style, with Mr. Gill also accompanying on guitar. “We’re going to try to do as many songs as we can remember being our age,” Mr. Brown cautioned. “I just turned 40.” ( Wisely, this 40-year-old skipped “Humpin’ Around.”)

Of the three, his vocals have eroded the most, so he saved his energy for a few key bursts — the end of the wistful “Roni,” which became unexpectedly tense, and the 1996 New Edition reunion song “Home Again,” after which he said, “I almost cried on that one.”

Though the show concluded with a halfhearted version of Mr. Brown’s “My Prerogative,” it really ended a song earlier, on the raw ballad “Can You Stand the Rain.” As on the original, Mr. Gill sang a few densely packed lines, then gave way to Mr. Tresvant, who massaged the room before passing the song back to Mr. Gill.

Throughout, Mr. Brown mostly looked on, smiling, and then, superfluously, joined in at the end — two old friends carrying a third across the finish line.