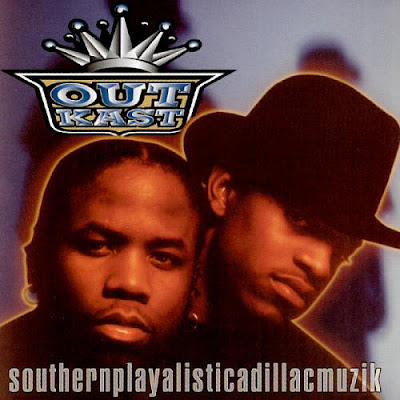 These are the words of Ruben “Big Rube” Bailey, and they appear on Big Boi and Andre 3000′s first album Southernplayalisticadillacmuzik (1994). The poem was called “True Dat”, and it added to the album in a way that not only defined who Big and Dre were as individuals and as a creative duo, but the commentary of “True Dat” elevated the album’s soul and consciousness in a way that embraced southern musical traditions and southern ways of culture. OUTKAST was an enigma when they came out. They were the underdogs. They came in through the backdoor of hip-hop’s house, and before anyone could do anything about it OUTKAST, The GOODie MOb, and Organized Noize Productions were eating everyone’s food and leaving dishes. Other than what was coming out of the West Coast and Texas, there was a dearth of music that married live instrumentation to southern storytelling laced with “shawty” rather than “shorty”. OUTKAST was such a befitting name at a befitting time. They surprised everyone. And before a crowd of boos and faces of regional confusion, Andre declared “the South got sumthin to say” while accepting the award for “Best New Album” at the 1995 SOURCE Awards. While the West coast was beefing with the East coast, the South remained neutral, calm, and just kept dropping quality music about being young, gifted, black, and living on the southside. OUTKAST pushed the envelope of creativity. Ultimately they changed the sound and look of hip-hop culture using the energy of not initially finding a home in hip-hop and being unaccepted in rap society. These two young African American men from the SWATS (Southwest Atlanta Too Strong) were destined to tell their story and the story of a misunderstood region.

The Daily Dose of Realness: For the next 30 days, my commentary will rest on this very idea. How does one achieve balance and harmony in an imbalanced world and society riddled with disharmony? Why is balance and harmony necessary to our socialization, as well as our personal and professional development? For example, when Andre raps “Don’t pull your thang out, unless you plan to bang.” What is he really saying? How can this be related to your personal life? What about your professional life? At the end of “True Dat”, Rube asks “Are you an OUTKAST?” He then admits that he is before saying “F being anything else.” My question is: Are YOU an Outkast? What role does being an OUTKAST play in achieving balance and harmony in your life? For HW, pull out your Southernplayalisticadillacmuzik. The DDR’s for this week will focus on this album.