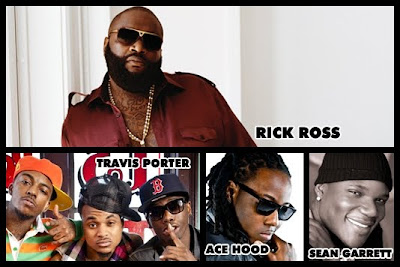 ATLANTA, April 25, 2011- U.S. performing right organization BMI will present its 14th Annual Unsigned Urban Showcase Wednesday, May 18, featuring a combination of the recording industry’s eminent stars and most-promising unsigned talent. Staged at The Buckhead Theatre (3110 Roswell Road, Atlanta, GA), the event begins at 8 p.m.; doors open at 7 p.m. The festivities are open to the public; attendees must be at least 18 years of age with valid identification. Limited advance tickets can be purchased Tuesday, April 26 at Ticketmaster for $25; tickets for $35 will be sold at the door (price subject to increase). For information on limited VIP tickets and/or tables, please contact BMIurbanshowcaseVIP@gmail.com.

Headliners for the highly anticipated night of music are the inimitable Rick Ross, Atlanta-based hip-hop trio Travis Porter, DJ Khaled-backed rapper Ace Hood, and hit-making wordsmith Sean Garrett, who will each bring their respective high-energy sounds. Attendees will be treated to a night of the high-energy performances now synonymous with BMI’s annual Unsigned Urban Showcase. Other headliners have included Drake, Lil Wayne, NAS and Trey Songz. Comedian Lil Duval will co-host the event with DJ Drama, who will lead the contestants through the Unsigned Urban Showcase competition. DJ Holiday will provide the night’s music.

Aspiring artists from all urban genres, including r&b, rap and hip-hop, were encouraged to apply for the opportunity to perform at this lauded, star-spotting annual showcase. Pulled out of the 300 suBMIssions received, four finalists will be announced to compete in front of a panel of music industry heavyweights, including top executives, artists, producers, managers and attorneys. The winner will receive an array of prizes (the 2010 prizes included studio time, a trip to the BMI Urban Awards, a photo shoot and much more).

BMI will also present the Legends of ATL Award to a community leader, recognizing his or her contributions to the Atlanta music scene. Past recipients of the prestigious honor include Big Boi, Big Oomp, Organized Noize, Dallas Austin and Lil’ Jon.

Broadcast Music, Inc.® (BMI), a global leader in rights management, is an American performing right organization that represents more than 475,000 songwriters, composers and music publishers in all genres of music and more than 6.5 million works. BMI has represented the most popular and beloved music from around the world for 70 years. The U.S. corporation collects license fees from businesses that use music, which it then distributes as royalties to the musical creators and copyright owners it represents. BMI songwriters and composers were the most celebrated creative voices in awards presentations and on the charts during the past year, accounting for almost two-thirds of the Grammy Awards and dominating other key awards and honors presentations across all genres of music.