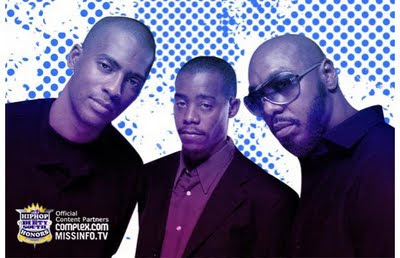 MUSIC BED "THE LEGENDS LIVE" FROM THEIR UPCOMING CD DUE FALL 2011
Louisville, Kentucky rap group Nappy Roots have announced they are working on a new album with veteran Hip-Hop production team, Organized Noize.

“We’ve been credited with creating the “Sound of the South,” and Nappy Roots is considered the “Conscience of the South,” so it’s great that Nappy wanted to work with us,” says Rico Wade of the Noize team, which also includes Sleepy Brown and Ray Murray. “People are going to be impressed by this album.”

“It’s an honor to be working with legends like Organized Noize," said group member Skinny DeVille. "Nappy Roots is a family and Organized Noize is like our older cousins that we haven’t seen in a while, so the [sessions are] like a family reunion. We stayed true to ourselves, but Organized Noize has pushed our limits and taken the music to the next level.”

"We’re happy to be partnering up with Nappy Roots on the next stage of their career," said Shannon Houchins. "They are an important part of Hip Hop history and we are honored to continue their legacy.”

CHECK OUT THE NEW VIRAL (PART 1 OF 7) ON THE MAKING OF THE NEW NAPPY ROOTS ALBUM
COMMENTARY BY RAY MURRAY, 1/3 OF ORGANIZED NOIZE