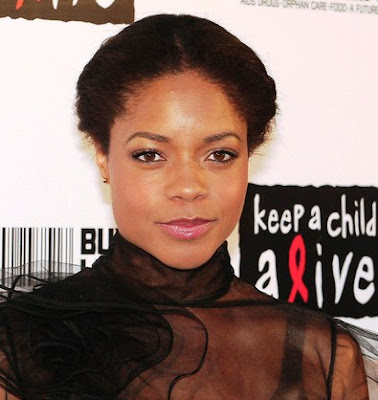 Naomie Harris at the Keep a Child Alive Black Ball 2011 at Camden Roundhouse. (June 15, 2011)
*Naomie Harris, currently rumored to be considered as the next Bond girl, says she prefers working on small films because big movies make her feel like a ”very small cog in a big wheel.”

The actress has starred in a string of blockbuster films, including “Pirates of the Caribbean: At World’s End” and “Miami Vice.” She’s also confirmed recently she’s in talks for the next 007 flick “Bond 23.”

But the English actress says she finds intimate sets like her current film “The First Grader” more rewarding. (See trailer below.)

“I’d done the big Hollywood thing and it was great, but it’s such a different experience working on a big movie. You feel like a very small cog in a big wheel, whereas when you do a small movie, you’re a small band,” she tells WENN. “There were nine of us who went out of England to Kenya to do ‘The First Grader.’ So you feel really included, you feel like a family. You feel you can contribute to the script. In all areas, you’re hands on.” 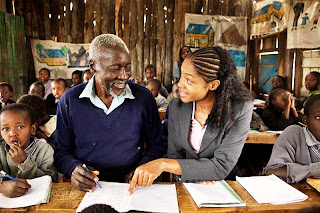 Jane (Naomie Harris) and Maruge (Oliver Litondo) in "The First Grader"
“The First Grader” tells the true story of the oldest primary school student in Kenya.

In a small, remote mountain top primary school in the Kenyan bush, hundreds of children are jostling for a chance for the free education newly promised by the Kenyan government. One new applicant causes astonishment when he knocks on the door of the school. He is Maruge (Oliver Litondo), an old Mau Mau veteran in his eighties, who is desperate to learn to read at this late stage of his life. He fought for the liberation of his country and now feels he must have the chance of an education so long denied – even if it means sitting in a classroom alongside six-year-olds.