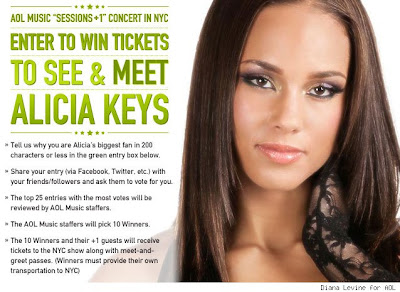 AOL announced the launch of AOL Music’s new “Sessions” format, “Sessions +1,” debuting on June 30th with a live stream performance of Alicia Keys from the Beacon Theatre in New York City. The special event, "Piano & I: A One Night Only Event With Alicia Keys," will feature the 14-time Grammy winner performing in celebration of the 10th anniversary of her debut album, Songs in A Minor. The intimate concert will feature many of Alicia’s hit songs, as well as stories and special moments from the past decade. Fans that cannot attend the landmark show in person can enjoy her set live from anywhere via http://music.aol/sessions/ and as an archived on-demand performance at AOL Music and VEVO. The live stream begins at 9:30 PM EDT on Thursday, June 30th.

“This is a really special moment for me.”

“This is a really special moment for me,” said Keys. “This concert celebrates the album which started it all for me, and shares the songs and stories of the last ten years in a very personal way. I’m honored to be the first artist to take part in ‘Sessions +1,’ and so grateful to be partnering with AOL, giving all my fans, regardless of where they live, the opportunity to come to New York and be a part of our celebration at the Beacon.”

“AOL Music has had a long and wonderful history with Alicia Keys and we’re excited to welcome her back for this momentous anniversary show and launch of the new ‘Sessions +1’ experience,” said Jeff Bronikowski, General Manager, AOL Music. “While we build on our legacy of helping fans discover new artists and creating unique experiences with incredible artists such as Alicia, our partnership with VEVO allows us to continue delivering premium content on a truly massive scale.”

“’Sessions’ is one of the most well-known brands in music, so we’re excited to partner with AOL Music on their new series, ‘Sessions +1,’” said Fred Santarpia. General Manager, VEVO. “Bringing fans the very best music programming experiences wherever and whenever they want them is what VEVO is all about. This new AOL series offers the best in live music from the hottest artists – we know our fans will love it.”

AOL has partnered with VEVO, the world’s leading all-premium music video and entertainment platform, to make AOL Music’s “Sessions +1” available across VEVO.com, mobile/tablet and connected television applications as well as its syndication partners.

While each “Sessions +1” event will be unique, most will incorporate a live audience and all will leverage social media to attract fans to surprise “pop-up” shows, drive online chats and influence the set lists through live voting and fan tweets. Additionally, AOL Music will build content for fans leading up to the event with features including fan testimonials and contests to determine an artist’s biggest fan.

A socially-driven performance event both online and offline, “Sessions +1” will incorporate audience participation to influence the performance and win exciting prizes such as exclusive merchandise and trips to attend future “Sessions +1” performances. The Alicia Keys “Sessions +1” launch event kicks off with a contest in which participants describe why they are Alicia’s biggest fan. Entrants will post their entry to social networks and solicit votes from their friends. Top vote-getters can win meet and greet passes at the Beacon Theater performance. Additional content to be featured includes Alicia’s Top Songs, Fan Testimonials and the Ultimate Alicia Keys Quiz.

On Tuesday, June 28, MBK/J Records/Legacy Recordings will release new Deluxe and Collector's 10th anniversary editions of Alicia Keys' Songs in A Minor, the groundbreaking debut album masterpiece that propelled Keys into international stardom in 2001. Available in a 2-CD Deluxe Edition and a 2-CD/1-DVD Collector's Edition, the 10th Anniversary sets include Songs in A Minor era bonus tracks, demos, live performances and more, hand-picked by Alicia for her fans for these editions. Fans can listen to the album early by visiting AOL Music’s Exclusive Alicia Keys CD Listening Party (CDLP) which will run through July 5th. Originally released in June 2001, Songs in A Minor sold more than 11 million albums worldwide and earned Keys her first five, of 14 total, Grammy® Awards, including Best New Artist, Best Song of the Year for "Fallin," and Best R&B Album. For more information, details and updates, visit www.aliciakeys.com, www.facebook.com/aliciakeys or www.twitter.com/aliciakeys.