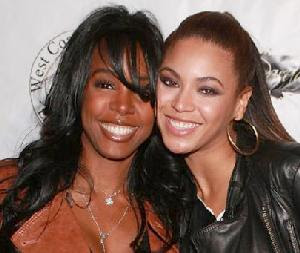 Is it necessary to ALWAYS pit Beyonce and Kelly against one another. They have said over and over again that they are family. Best friends. So why do we continue to want the two of them to hate and throw shade when its not needed?

“How can this kr song with the weakest beat and melody of all time be the #1 song on urban!? Oh yeah. Wayne,” Bhasker tweeted.

Oh, and to make sure he got his point across, Bhasker, a Grammy winning producer who’s also worked with Kanye West, Alicia Keys and Jay-Z, went back in on Kelly with this follow up tidbit:

“I just listened to Motivation again to see if I was to harsh in my critique. I wasn’t. The lyrics are horrid as well.”

And as if he said nothing of substance moved on to his next brainless tweet.

"Come on twitter you know you live for the negative tweets."

Although Kelly fans are up in arms and making it heard, so far, no response via Twitter from Rico Love, Kelly's 'Motivation' producer. Ladies and gentlemen, we have a bigger person!

And we have more Kelly Rowland news. Miss Kelly will be making her debut appearance on the next episode of Single Ladies. She'll play "DJ Denise", a woman who will likely take things too far with April's artist. Watch:

Anonymous said…
to Beyonce producer wow dude and you really think beyonce girls is a hit. Boy please listen to all the neagtive comments she recieved on that whack ass song. Sound like a song selena Gomez need to sing that young as song. Selens probably would have killed it to. Boy please a grown ass man hating on kelly. You mad cause bey didn't come up with that song. Get a real job stop biting bey ass.
July 27, 2011 at 10:29 AM