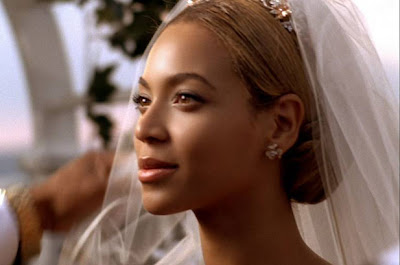 In the Diane Martel directed video for her second single, "Best Thing I Never Had," Beyoncé gives thanks that her high school sweetheart showed his true colors sooner than later -- clearing way for another man, a better man, to tie the knot with.

What better way to show your ex they're the best thing you never had than with saying "I Do" to someone bigger and better in a Baracci Beverly Hills wedding gown.

Best Thing I Never Had" debuts the same week Beyoncé's fourth studio album, "4," scores the No. 1 slot on the Billboard 200, selling 310,000 copies, according to Nielsen SoundScan.

1. "1+1": Written & produced by Tricky Stewart & The-Dream. It showcases Bey's vocal prowess, passion of lyrics are as intense as the electric guitar.

2. "I Care": "I know you don't care too much but I still care," Beyoncé coos. Beauty in honesty and, ironically, power in admitting your vulnerability.

3. "I Miss You": Co-produced by Bey'. Written by Frank Ocean. "I miss you/ But if I got with you, could it feel the same?" Longing lingers in between each word.

4. "Best Thing I Never Had": "Irreplaceable" 2.0, theme-wise. Ditched Ne-Yo for Babyface. Builds to an 'I'm moving on' anthem, "Thank God I found the good in goodbye."

6. "Rather Die Young": Love without care of what others say. James Dean reference. "I rather die young/ Than live my life without you/ Rather not live at all..."

7. "Start Over": Again honest when it comes to love, Bey' won't surrender till she and beau "give love another life." Bey's roar matches the song's fight.

10. "End of Time": Co-written and produced by The-Dream. He's everywhere! The drums steal the show. Would trade for "Run the World (Girls)" as lead single.

11. "I Was Here": Diane Warren writes a reflective ballad for Beyoncé. "The hearts that I have touched are the proof that I leave that I made a difference..."