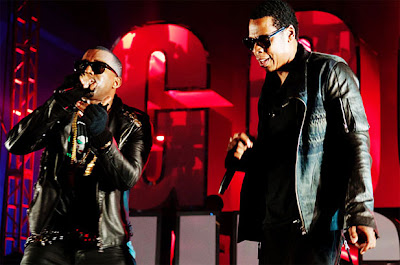 The listening was held in a suite on the second floor of the Mercer Hotel, in SoHo, and lasted for roughly three hours, with Jay-Z playing eleven songs from an Apple laptop for a select group of music journalists and two teenage fans who had won access to the session for being the first two customers to pre-order the album through Jay-Z's lifestyle site, Life and Times, which began accepting pre-orders on Monday, July 4. Kanye West did not attend.

Following the eleventh song, Jay-Z invited those in the room to have an informal conversation that lasted for about an hour.

"We can have a conversation," he said. "I don't want to do an interview. Put your pads away - we can talk all night."

He then played snippets of at least three other songs, including one featuring producer Swizz Beatz, that may or may not be included on the album. Other songs that have been rumored to be on the album, including the single "H*A*M," which was released in January, and "That's My B*tch," which appeared online late last year, were not played. Frank Ocean, the Def Jam singer and Odd Future affiliate, appeared on two of the initial eleven songs played, while Jay-Z's wife, Beyonce, appeared on one.

Beyonce Walks Down the Aisle in 'Best Thing I Never Had': Watch

Jay-Z suggested that a video for the song featuring Beyonce, tentatively titled "Lift Off," could appear, but that he was reluctant to follow a traditional, single driven release for "Watch The Throne." Jay-Z would not confirm a release date for "Watch The Throne," saying only that the album would come "soon," and no information was given regarding how the album would be released or through what label or combination of labels.

Jay-Z also said that he already had two songs completed for his next solo album and four additional concepts in mind. Frank Ocean appears on one of the songs already completed, and Jay-Z said he hoped to capitalize on the burst of inspiration provided by the "Watch the Throne" and continue recording for his next solo project. He would not speculate as to when that project might arrive.

First announced late last summer via Kanye West's Twitter feed, the "Watch The Throne" project has been the subject of much rumor and speculation. While celebrating in Las Vegas on New Year's Eve, Kanye suggested that the album would arrive in January, but instead January brought the single, "H*A*M," and no album. The album was then said to be arriving in March, and then in June, it was announced that the album would arrive on July 4.

Although Monday brought no sign of the album, fans could begin pre-ordering the project through the Life and Times site, which redirected to an Island Def Jam page where the deluxe version was made available for $16.99, standard CD for $13.99, a deluxe digital version for $14.99, and standard digital album for $11.99. MTV's RapFixLive reported that customer receipts listed the ship date as 2011-08-02. Last night, Jay-Z said that he did not know how the July 4 release date rumor had originated.

Jay-Z arrived at the Mercer Hotel shortly before 9 p.m., after coming directly from Yankees Stadium where he had been watching the New York Yankees play the Tampa Bay Rays and hoping to see Yankee captain, Derek Jeter, get his 3,000th hit. Jay-Z was wearing a white tee, a New York adjust-to-fit hat turned to the back, jeans, and white on white shell toes. Guests were escorted to suite 208, where seating was limited and some in attendance were forced to stand. The room featured an entire studio set up, including a mixing board and mics.

Jay-Z sat at the head of the room and played songs from a Mac laptop. Guests were served champagne from the house that Jay-Z owns, Ace of Spades, and offered cheese and crackers. Before playing songs, Jay-Z asked those in the room to introduce themselves and then asked if those standing in the entryway wanted to come in, joking, "Sit on the floor, we can make it like camp."

"I think we should just play some music," he said, by way of introduction, and then he played eleven songs back to back without breaking to offer any details on specific songs.

Although many guests at last night's listening session had been given the impression that they would be able to live-tweet the event and their reaction to the album, those in attendance were told not to use Twitter during the session and to avoid quoting direct lyrics in their reviews, as songs and presumably verses could still change. Guests were encouraged to take notes, however, and were offered RocNation notepads and pens. The session was briefly interrupted when one media rep was removed from the room shortly after the session began for live tweeting his reaction to the songs being played.

The songs were dramatic and boastful, with Jay-Z often taking the lead lyrically, and the collection showcased the differences between the two artists - Jay-Z, the technical marksman, and Kanye, the emotive chest beater. Jay-Z said the two began recording the album last year in England and had recorded in Australia while Jay-Z was on tour, as well as in New York, Paris, and Los Angeles, often in hotel rooms. At least one of the songs played was recorded at New York's Tribeca Grand.

Following the eleventh song - a dramatic record about loyalty featuring several sonic shifts, closing in a barrage of strings that spike to an abrupt end - Jay-Z said "that's how the album ends," and then he opened the floor.

During the informal conversation, Jay-Z said that the album had gone through three iterations and that he and Kanye had scaled back from their original direction, which was even more dramatic and calculated than the songs played last night. "H*A*M" was reflective of that direction, he said, and he said that he had been reluctant to release that record. In retrospect, he said, the first song released from "Watch the Throne" should have been a three-minute song built on Kanye and him simply trading verses, no hook.

Jay-Z also talked about the difficulties of the collaborative process, and said that he wasn't in a hurry to do another collaborative album because of the intense arguments that erupt during the process. Still, he said that he respected Kanye's passion and hinted that more than one Watch The Throne sequel could come in the future. He also said that Kanye had originally argued against Jay-Z releasing the "Blueprint 3" single "Run This Town," when he became convinced that the song wasn't a hit after watching the reaction to the record at a barbecue hosted by the DJ Enuff led DJ collective, the Heavy Hitters.

Jay-Z and Kanye West have 15 No. 1 albums between them, and Jay-Z recently passed Elvis Presley as the artist with the second most No. 1 albums of all time, 11, second only to the Beatles, who have 19.