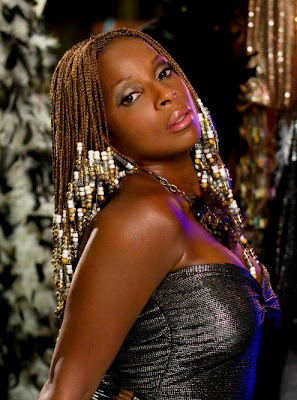 Who says MJB isn't an around the way girl? Well she is in more ways than one in the 2012 release of Rock of Ages. Mary is gearing up to play Justice Charlier and her look is dramatically different the manicured coifs she usually dons, but quite fitting for the role she's undertaking. In the movie, Justice (MJB) is the owner of a gentlemen’s club.

Mary describes the role of Justice as “the rock.”

“She’s probably the person with the most problems that they never see. She has to keep everybody lifted up. That’s the inner work.” says Mary.

“The inner work is that she’s been through hell, she can’t find a love, so she ended up in a strip club,” she told ScreenRant. “But, she’s fun. She’s funny. Most funny people have sad, sad stories. So, she’s the light and the dark place I believe.”

Also, as expected, she’s going to be singing on the soundtrack, which she is very excited about.

“I love the fact that everyone is singing. It’s like, we act-sing, act-sing. So there are songs like ‘Any Way You Want It’ by Journey that I’m singing and ‘Shadows of the Night’ by Pat Benatar,” she gushed.

For those of you who've yet to see the musical, it takes place in Hollywood in the 1980s and follows Sherri (Julianne Hough), a small-town girl who moves to the city in hopes of becoming an acting star. She goes to work at The Bourbon Room where she strikes up a relationship with Drew, the busboy. Meanwhile, a pair of German city developers are initiating a plan to create a cleaner lifestyle in the area and that means sex, drugs and rock-n-roll are out and so is The Bourbon Room.

Also signed on to the movie are Tom Cruise, Paul Giamatti, Russel Brand, Alec Baldwin, Catherine Zeta-Jones, Will Forte and more. Go Mary, you're moving up with the big boys!