Blackfilm.com has exclusively learned that Spike Lee is currently working on a new feature film called ‘Red Hook Summer‘ with production slated to start this month.

Details on the plot is limited, but a close source has informed us that the story centers on a adult from Atlanta who comes and spends the summer in Red Hook section of Brooklyn, NY.

The kicker to this story is that Lee will be reprising his role as Mookie, the character he played over twenty years ago in his most famous film, 1989′s ‘ Do the Right Thing.’

This morning Spike sent out this message on his twitter account , “”Wake Up. I been up since 430am. On the way to the set of THE NEW SPIKE LEE JOINT. Today is 1st Day of Shooting. Awwwwwwwwwwww Sheeeeeeeeeeeeet”

Spike was 32 when he played the Brooklyn pizza delivery worker who clashed with his boss, played by Danny Aiello, over racial issues. 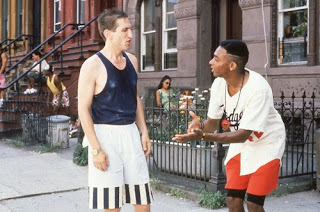 Now 54, it’s undetermined whether the character Mookie in ‘Red Hook’ will be seen in the past or present. Lee’s films have been set in different time periods over the years with ‘Crooklyn’ set in the mid 90s, ‘Summer of Sam’ in the 70s, and others.

While Lee has stayed busy these last few years, helming projects like the documentaries ‘Kobe Doin’ Work,’ and ‘If God Is Willing and Da Creek Don’t Rise,’ which is the follow-up to his acclaimed documentary ‘When The Levees Broke: A Requiem in Four Acts,’ his last feature film was the 2008 war film ‘Miracle At St. Anna.’

In that film, Laz Alonso’s character is first seen in the present as an old man before recalling his days in the war ala ‘Saving Private Ryan.’

Stayed tuned for more details such as casting, but welcome back Mookie!