State of the Atlanta Music Scene: ONE MusicFest 2011

Mountain Dew, Ford, Miller Lite and SolFusion presented ONE MusicFest to the City of Atlanta on Thursday, July 21, 2011 during the “State of the Atlanta Music Scene” Press Conference and Roundtable. ONE MusicFest is an intimate indoor/outdoor music festival that will showcase performances from over a dozen artists in one day. During the press conference, the office of Atlanta Mayor Kasim Reed also officially recognized ONE MusicFest with a welcome letter presented by the mayors' Senior Communications Specialist, Justin Tanner. Save the date: August 27, 2011.

The ONE MusicFest “State of the Atlanta Music Scene” Press conference and Roundtable took place at Park Tavern, which will also serve as the location for this year's ONE MusicFest concert. Saniyyah Griffin served as the panel moderator. Dantes Rameau, from ONE MusicFest 2011's official non-profit partner, The Atlanta Music Project came and discussed this year's music instrument drive taking place at the festival. ONE Musicfest featured artist and panelist Anthony David who captivated the crowd with a special live performance.

“There is a lack of representation for soul, progressive hip-hop, alternative and rock, represented under one roof, in the format of music festivals in Atlanta. We have noticed that while there are many pockets of individuals that share taste in the same music, rarely do you see them share in this together. ONE MusicFest was created with the idea of music as the universal language. Over time we aim to grow this fest into a phenomenon and bring together different sectors of individuals through a unique music platform," stated J Carter, SolFusion Founder and ONE MusicFest Producer. 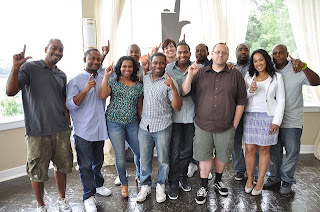 To join in on the conversation, the twitter handle is@OneMusciFest.