COMING SOON TO A THEATRE NEAR YOU... 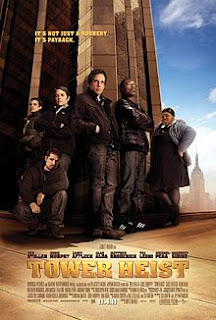 by the Damzel
Eddie Murphy and Ben Stiller join forces for revenge in the caper comedy 'Tower Heist' -- and we've got a first look at two comedy geniuses at work. Its hilarity through and through. Eddie Murphy is back in action.

Ben plays Josh Kovacs, the manager of one of New York's most luxurious and tightly secured residential building in the city. In the swanky top penthouse, Wall Street titan Arthur Shaw (Alan Alda) is under house arrest after being caught stealing two billion from his investors.

When Josh and his blue collar co-workers (including Matthew Broderick, Michael Pena and Gabourey Sidibe) realize that they've lost the pensions they entrusted Shaw to manage, they plot revenge. After hearing that Shaw could be keeping $20 million in cash in his penthouse suite, the amateur thieves plot the ultimate heist with the help of Josh's childhood pal, petty crook Slide (Eddie Murphy).