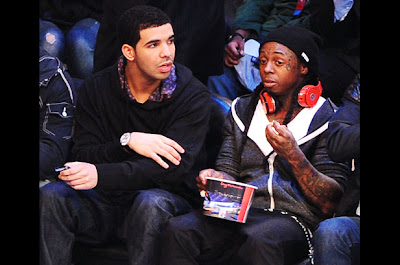 by the Damzel
This is what a copycat looks like. I find it a bit annoying that so soon after Jay Z and bestie Kanye decided to become 'KanJay' that the ink isn't dry on the album before others are in line to do the 'duet' album. But since there is nothing new under the sun, there will now be a collabo album in the making starring Lil Wayne and protege Drake. Yeah, them too.

Birdman announced and recently told XXLMag,"Wayne and I recently talked about [the Lil Wayne/Drake collaboration album],....That's definitely going to get done."

Now, you don't get points for coming up with the idea first. He who produces first wins. But just for the heck of it, last November Birdman told VIBE.com that the joint album is "very possible....Because Wayne works a lot and Drake is out there with us too. They're gonna do a lot of recording together so I don't see why not."

Drake weighed in saying of his visit to Lil Wayne in prison, "I went to Rikers and me and Wayne agreed there will be a Lil Wayne/ Drake album...That would probably be one of the most exciting things in my life. We just make music on a whole different level... A whole album, to think of all the things we can do."

According to the duo, the album could hit i-tunes late in the fourth quarter if they go hard to get it out. But when aked what the difference would be from what KanJay is doing, Birdman added, "It's older versus younger. I listened to a few songs [off "Watch the Throne"] and it feels like an older feel to me. I think with Drake and Wayne, they young. They young cats. You got 23 and 28. Then you got Jay-Z and them, who are older and really on their way out the game. Then you got Wayne and Drake and them, who are still youthful to the game. So, it's two different types of music all the way across the board."

Is Kanye on his way out the game? Jay too? Who knew?