Eddiie Murphy: No G Movies for a While But Maybe He'll Tell a Few Jokes

(Rolling Stone) -- After years of near-silence, Eddie Murphy gives a rare extensive print interview in the new issue of Rolling Stone, on stands and available through Rolling Stone All Access on October 28th.

In the Q&A, Murphy opens up to senior writer Brian Hiatt about the ups and downs of his long career, his possible return to stand-up, his Oscar hosting plans and much more. Murphy, who co-stars in the upcoming "Tower Heist," is baffled by his reputation as a near-recluse: "I leave my house all the time," he says. "But I'm not at all the Hollywood parties. I'm grown, and where else am I supposed to be? I'm supposed to be home . . . If I were out in the clubs every night, they'd be saying, 'That's a shame, look at him, 50 years old, he's still out at these clubs.' Recluses are nasty, with long nails, don't wash their a**. . . . I'm too vain to be a recluse. But homebody, absolutely. I'm 50 years old, beautiful house, I'm supposed to be home, chilling."

Murphy says that his days of making family movies may be over.

"I don't have any interest in that right now," he says. "There's really no blueprint, but I'm trying to do some edgy stuff. And I only want to do what I really want to do, otherwise I'm content to sit here and play my guitar all day. I always tell people now that I'm a semiretired gentleman of leisure, and occasionally I'll go do some work to break the boredom up."

Murphy has decided not to make "Beverly Hills Cop IV."

"They're not doing it," he says. "What I'm trying to do now is produce a TV show starring Axel Foley's son, and Axel is the chief of police now in Detroit. I'd do the pilot, show up here and there. None of the movie scripts were right; it was trying to force the premise. If you have to force something, you shouldn't be doing it. It was always a rehash of the old thing. It was always wrong." 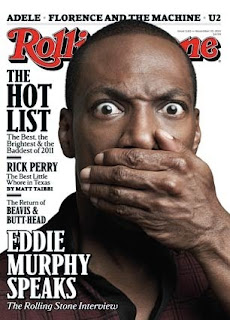 Unlike other "Saturday Night Live" alumni, Murphy has refused to participate in retrospectives and hasn't been on the show in years -- but he's gotten over his grudge.

"They were s***** to me on 'Saturday Night Live' a couple of times after I'd left the show," he says. "They said some s***** things. There was that David Spade sketch [when Spade showed a picture of Murphy around the time of "Vampire In Brooklyn" and said, 'Look, children, a falling star']. I made a stink about it, it became part of the folklore. What really irritated me about it at the time was that it was a career shot.. I felt s***** about it for years, but now, I don't have none of that."

Murphy hasn't performed stand-up since the late 1980s, but recently, he's given some thought to trying again.

Murphy addresses reports that he stormed out of the Oscars after losing the best supporting actor award to Alan Arkin.

"Alan Arkin's performance in 'Little Miss Sunshine' is Oscar-worthy, it's a great performance. That's just the way the s*** went. He's been gigging for years and years, the guy's in his seventies. I totally understood and was totally cool. I wasn't like, 'What the f***?' Afterward, people were like, 'He's upset,' and I'm like, 'I wasn't upset!' What happened was after I lost, I'm just chilling, and I was sitting next to Beyoncé's pops, and he leans over and grabs me and is like, [solemn voice] 'There will be other times.' And then you feel Spielberg on your shoulder going, 'It's all right, man.' Then Clint Eastwood walks by: 'Hey, guy . . . ' So I was like, 'It's not going to be this night!' [Mimes getting up] I didn't have sour grapes at all. That's another reason I wanted to host the show -- to show them that I'm down with it."

See the full article at RollingStone.com.