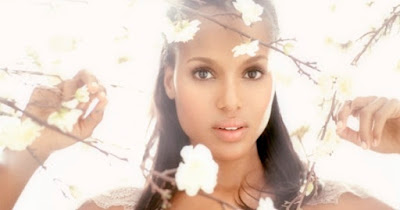 Quentin Tarantino‘s upcoming film Django Unchained is his spin on the spaghetti western, or as he’s calling it, “A Southern” due to its setting. The movie focuses on escaped slave Django (Jamie Foxx) and his quest to free his wife Broomhilda from cruel slave owner Calvin Candie (Leonardo DiCaprio). Deadline is now reporting that the wife will be played by the talented Kerry Washington (The Last King of Scotland) . She’s another addition to an impressive cast, which also features Christoph Waltz, Samuel L. Jackson, Kurt Russell, M.C. Gainey, Dennis Christopher, Gerald McRaney, Laura Cayouette, Don Johnson, Tom Savini, and possibly Joseph Gordon-Levitt. Due to the film’s setting, most of these actors are playing incredibly ugly characters. The script features three men raping and branding Broomhilda and forced brawls between slaves.

While Broomhilda may seem like a damzel in serious distress (I didn't make this up), Tarantino is known for writing strong female characters, so hopefully she won’t just be a victim. Tarantino reportedly had his eye on Washington from the start, but he was also interested in making a discovery, which drew out the casting process for the role. Washington will next be seen in the dark comedy The Details. Django Unchained is set to open on December 25, 2012.