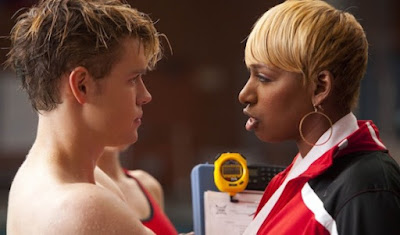 Sam (Overstreet) encounters Coach Roz Washington, the synchronized swim coach played by none other than Nene Leakes! Coach Roz is rumored to be another nemesis of Sue Sylvester. From the look on her face, Coach Roz is a no-nonsense coach and she seems to be letting Sam have it.

According to reports, Leakes will star in two episodes, including the Grease and Michael Jackson-themed episodes, both set to air in January 17th at 8pm on FOX. The first of the two will be the episode entitled "Yes/No," which airs on Tuesday January 17th.