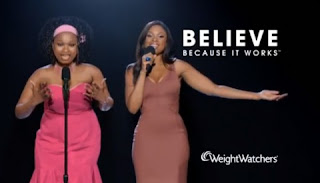 Newly-slim Jennifer Hudson shows off her dramatic weight loss by belting a duet with her larger self in her latest Weight Watchers commercial.

The singer, a spokeswoman for the brand, has lost 80 pounds in recent months and appears side-by-side, thanks to special effects, with footage of herself back in 2004 singing Whitney Houston’s “I Believe in You and Me” on “American Idol.”

In the commercial, which first aired during the season finale of X Factor, Jennifer takes the stage in a body-hugging mauve dress and a sophisticated hairstyle -- both of which illustrate how far she has come in both taste and fitness compared to the J.Hud of old. The ill-fitting hot pink number and mass of crimped curls do nothing for the far less chic visage the new Hudson joins onstage