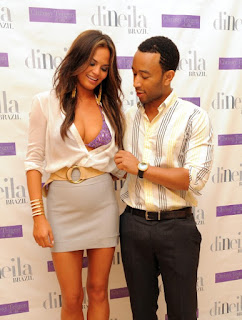 R&B star John Legend is engaged to marry supermodel Chrissy Teigen. The couple "got engaged over the holidays while vacationing in the Maldives," the singer's representative told Us Weekly. Legend and Chrissy have been dating since 2007.

Teigen, 26, has starred on the game show Deal or No Deal and has appeared in the Sports Illustrated Swimsuit Issue and Maxim, as well as ad campaigns for Billabong, Fredericks of Hollywood and Victoria's Secret.

Legend, a nine-time Grammy winner, is currently working on a new solo album to be released on Kanye West's G.O.O.D. Music label sometime in 2012. The singer is set to ring in 2012 with a performance at the Pearl Concert Theater at the Palms Casino Resort on New Year's Eve.