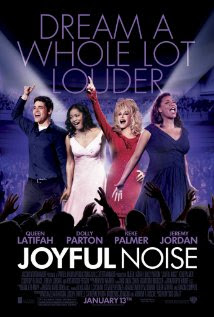 ’ “Joyful Noise,” a funny and inspirational story of music, hope, love and renewal, which opens in theatres January 13, 2012 will release its soundtrack just three days before the movie opens nationwide.

"Joyful Noise" brings together the sounds of gospel, pop, country, rock and R & B with performances by Dolly Parton Queen Latifah and Keke Palmer . The soundtrack to “Joyful Noise” includes these performances, including renditions of memorable songs originally recorded by a wide range of artists such as: Chris Brown, Michael Jackson, Paul McCartney, Sly & the Family Stone, Usher, and Stevie Wonder.

Five-time Grammy winner and 10-time Grammy nominee Mervyn Warren (“Dreamgirls,” “The Preacher’s Wife,” “Sister Act 2”) produced and arranged all songs on the “Joyful Noise” soundtrack. Warren has written arrangements for the likes of Quincy Jones, David Foster and Whitney Houston, and was a member of acclaimed a cappella group Take 6. He is also a recipient of a Soul Train Award and has been recognized by the NAACP Image Awards, Dove Awards, and Stellar Awards.

The “Joyful Noise” soundtrack will see its release at both physical and digital retail on January 10, 2012.

"Joyful Noise" opens nationwide on January 13, 2012. This film has been rated PG-13 for some language including a sexual reference. www.joyfulnoisethemovie.com

Belgie said…
If you enjoy gospel music and a plot that ends well for everyone you will enjoy the movie.
Dolly and Queen Latifa are good but Dolly's grandson and Queen's daughter are really the highlight of the movie.
January 17, 2012 at 8:53 PM

Feel free to surf to my web blog ... experimental evidence for therapeutic potential of taurine in the treatment of nonalcoholic fatty liver disease
May 28, 2013 at 3:06 AM