Would Mama Evelyn Really Slap the Piss Out of Tamar? Seriously? Yes! 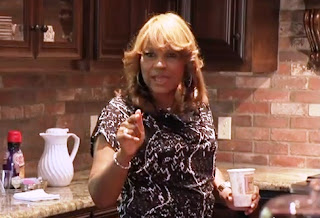 In the season 2 premiere of “Braxton Family Values,” Mama Evelyn famously informed Tamar that should she EVER think to disrespect her again, she would “slap the piss” out of Tamar. This sent shockwaves through the dot com community and many wonder is Mama Evelyn just bark and no bite.

Would Mama Evelyn ever really follow through on such a threat, or was it all for the cameras?

Although Tamar is the youngest siter, she is also grown.

Damzel Speak: Take it from me, another grown woman. I have quick reflexes because my mother has shown me action speaks louder than words. If you want to miss the backhand, move quickly. I know my mother is always my mother first and a friend after. Til the day she leaves this world, my mother has a license to chastise if need be. I believe most black moms feel this way and deservedly so. So, I believe Mama Evelyn and so did Tamar. Take a listen.

In the audio below, EURweb’s Lee Bailey asks Tamar if her mother was just bluffing.

Tamar Braxton on her mom threatening to slap her by CherieNic